Happy Monday, y’all! I’m super excited to share with y’all one of my favorite recipes that I have made so far. I really like this recipe in particular because there are a lot of vegetables that are incorporated into the dish and I never really eat enough veggies, so this is just a delicious way of getting my veggies in! Here is everything that you will need ingredients wise: 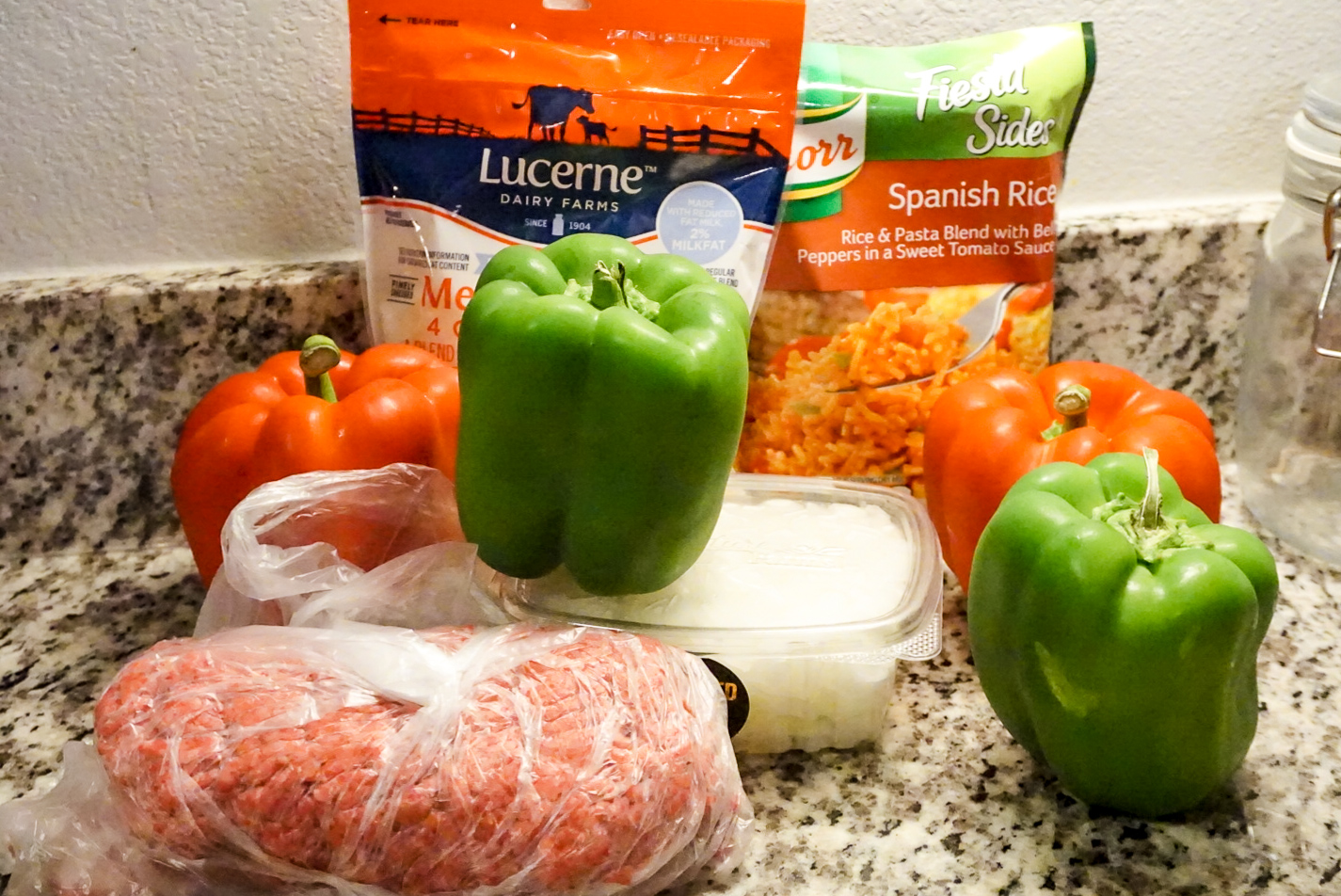 Once you have all your ingredients, then the first thing you will want to do is preheat your oven to 350 degrees and start browning your ground beef in a medium-sized skillet. Once you have the meat prepped and cooking, go ahead and cut the tops of the peppers and set them aside and start cooking your pack of rice. Once your beef is completely done browning you will want to drain the excess grease so it doesn’t mess up your mixture late on. Once it is drained, then you will want to season your beef to your liking and then just scoop it onto a plate or another dish while you start to cook your peppers and onions. 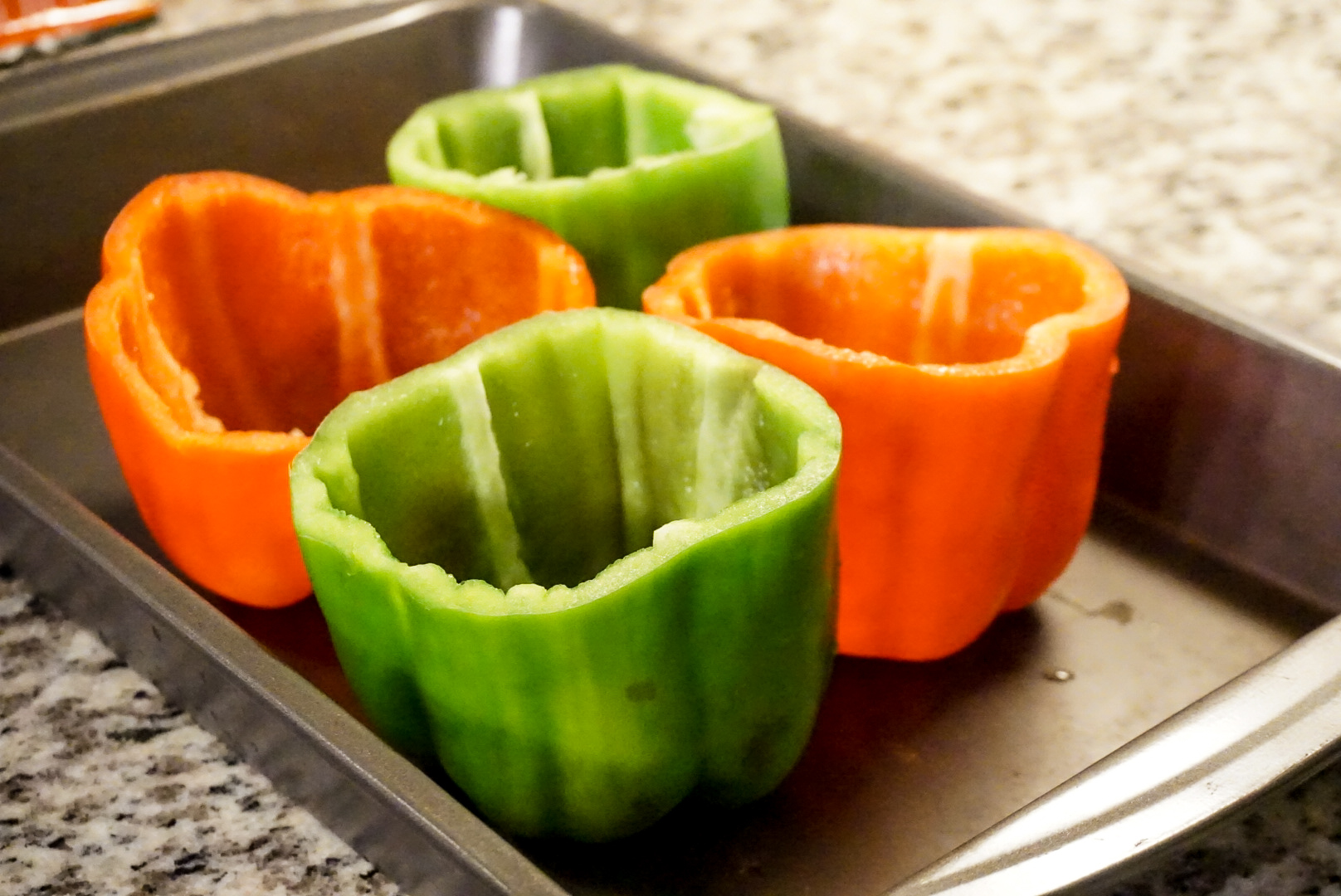 Since you already cut the tops off the peppers and set them aside, then you will want to set the peppers upright in a pan shown on the right. Make sure that you have removed all the seeds and whatever else is inside the pepper first before you continue. From there you will want to start dicing up the tops of the bell peppers because you will be using it in the filling. I only had four bell peppers and when I chopped up the tops, it came out to be a lot of diced bell pepper which is perfect! 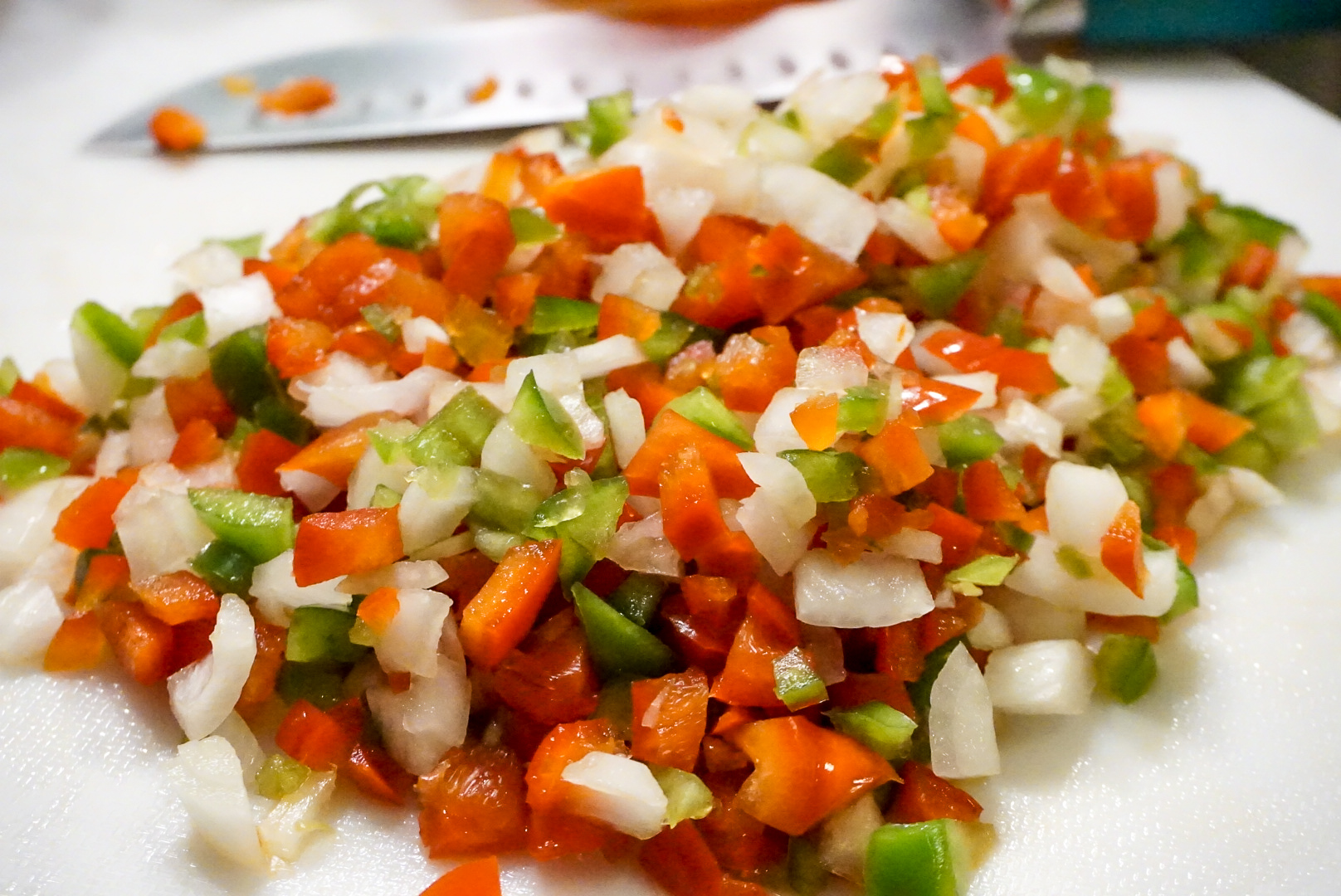 From there I added in about one onion into the pepper mixture and then I set it to the side until our ground beef had completely finished browning. After the meat was done I scooped it onto the plate and added about 2 teaspoons of oil to my hot pan. Once the oil was hot I added in my bell pepper and onion mixture along with my drained can of Rotel. You will want to let the mixture cook for about 3-5 minutes or until the mixture is soft and sautéed and then add a little salt and pepper for taste. Once my mixture was done, I added the meat back in along with one cup of our cooked rice and about one cup of shredded cheese. Once you have everything mixed, then you will want to start taking the stuffing and stuffing it into our emptied bell peppers. 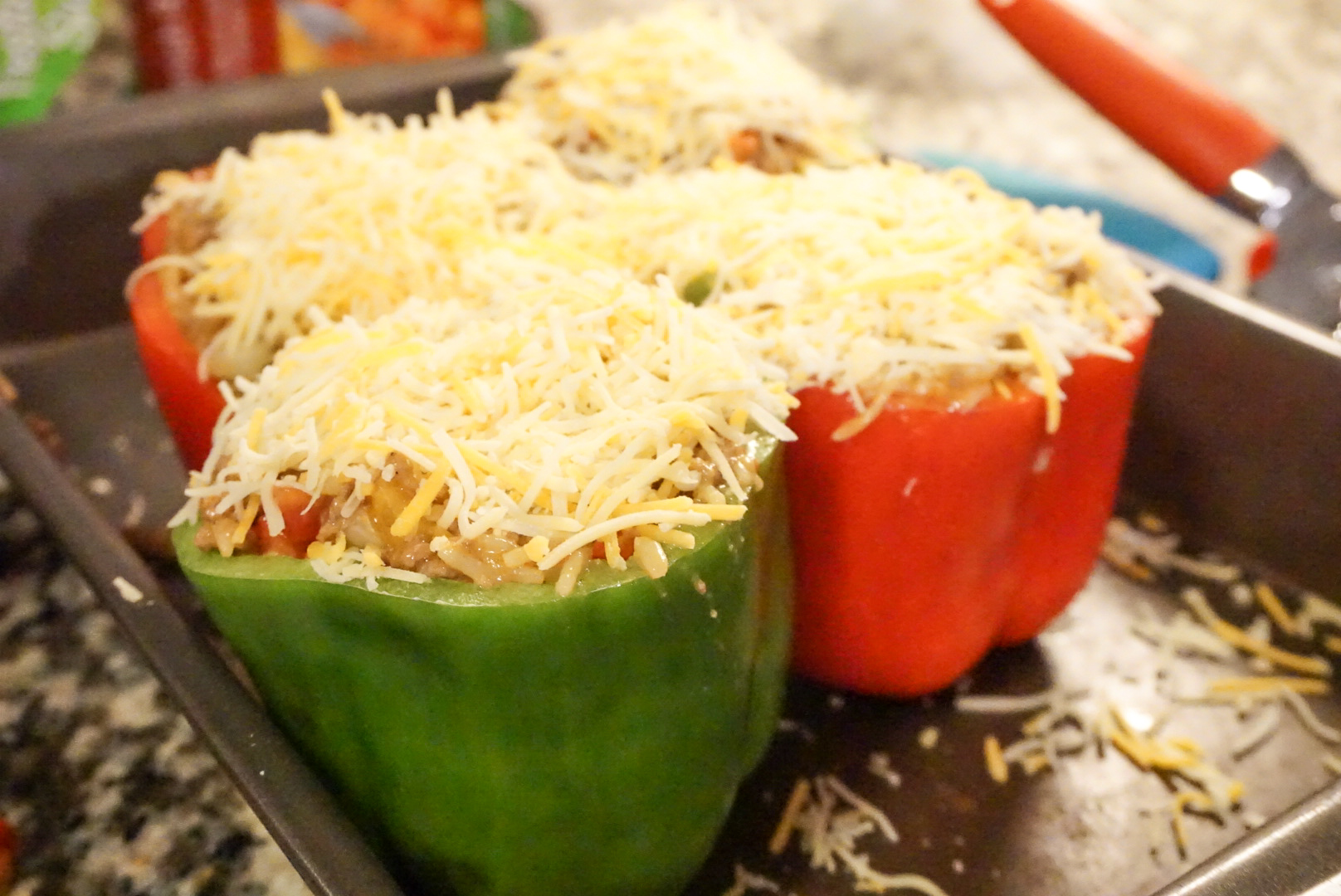 I had pretty large bell pepper, so there was a lot of stuffing in each pepper. Once you have each one stuffed, then you will want to sprinkle some cheese to the top of the pepper each pepper. Before you put the peppers in your oven to finish cooking, go ahead and add some water to the bottom of the pan so that they don’t get too crispy and burn and then just top it with some foil. Throw the peppers into the oven for about 15-25 minutes and then remove and enjoy! I had literally less than one pepper and was more than full lol. I hope y’all enjoy all the deliciousness that this recipe has to offer! Here is the final pic of what my peppers looked like! ( I didn’t have foil hence the crunchy cheese at the top lol) 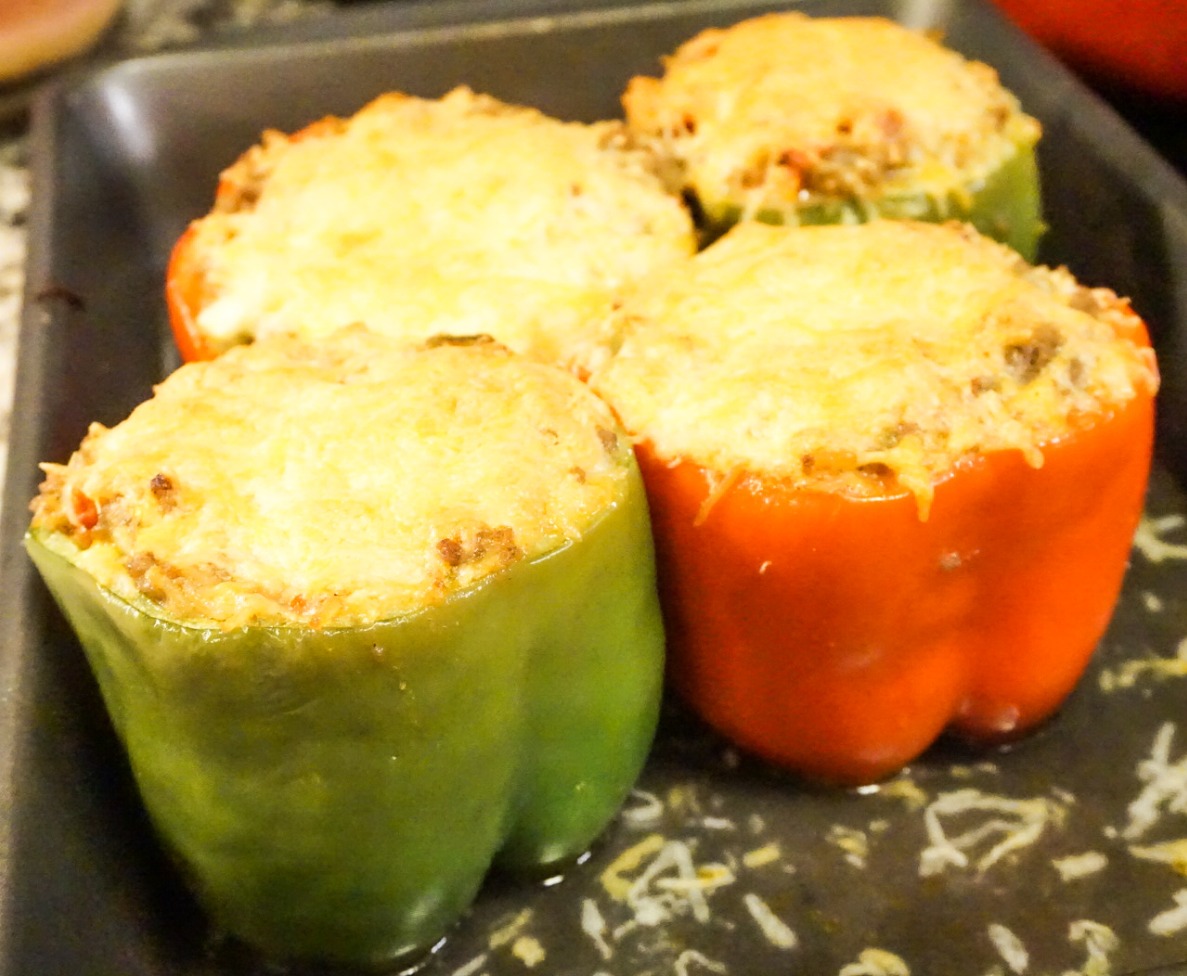