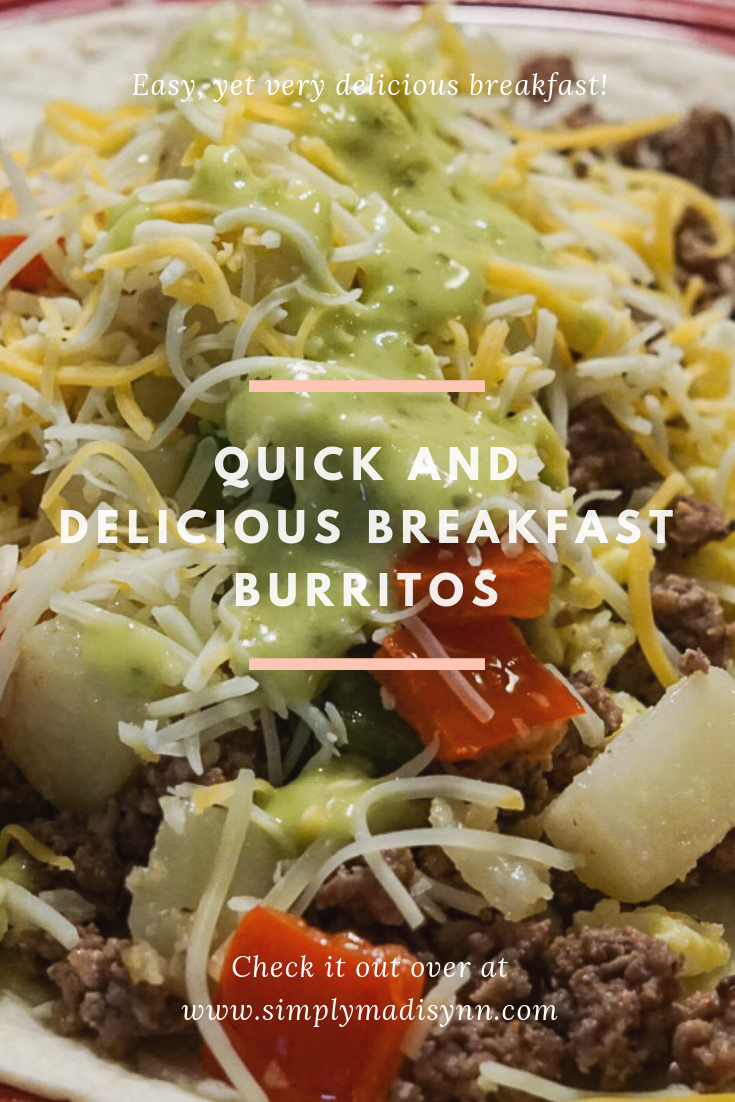 Happy Tuesday y’all! I usually post some type of recipe on the blog weekly, so I thought today would be the perfect day to share my Breakfast Burrito Recipe! In high school, there was a gas station that sold some of the BEST breakfast burritos that I have ever had. If you ever go to the Mobile Gas Station in Heath, Texas, then you definitely need to try them out because they are life changing. Although they are life-changing, they are about 45 minutes away, so I went ahead and took matters into my own hands yesterday and boy was it delicious! 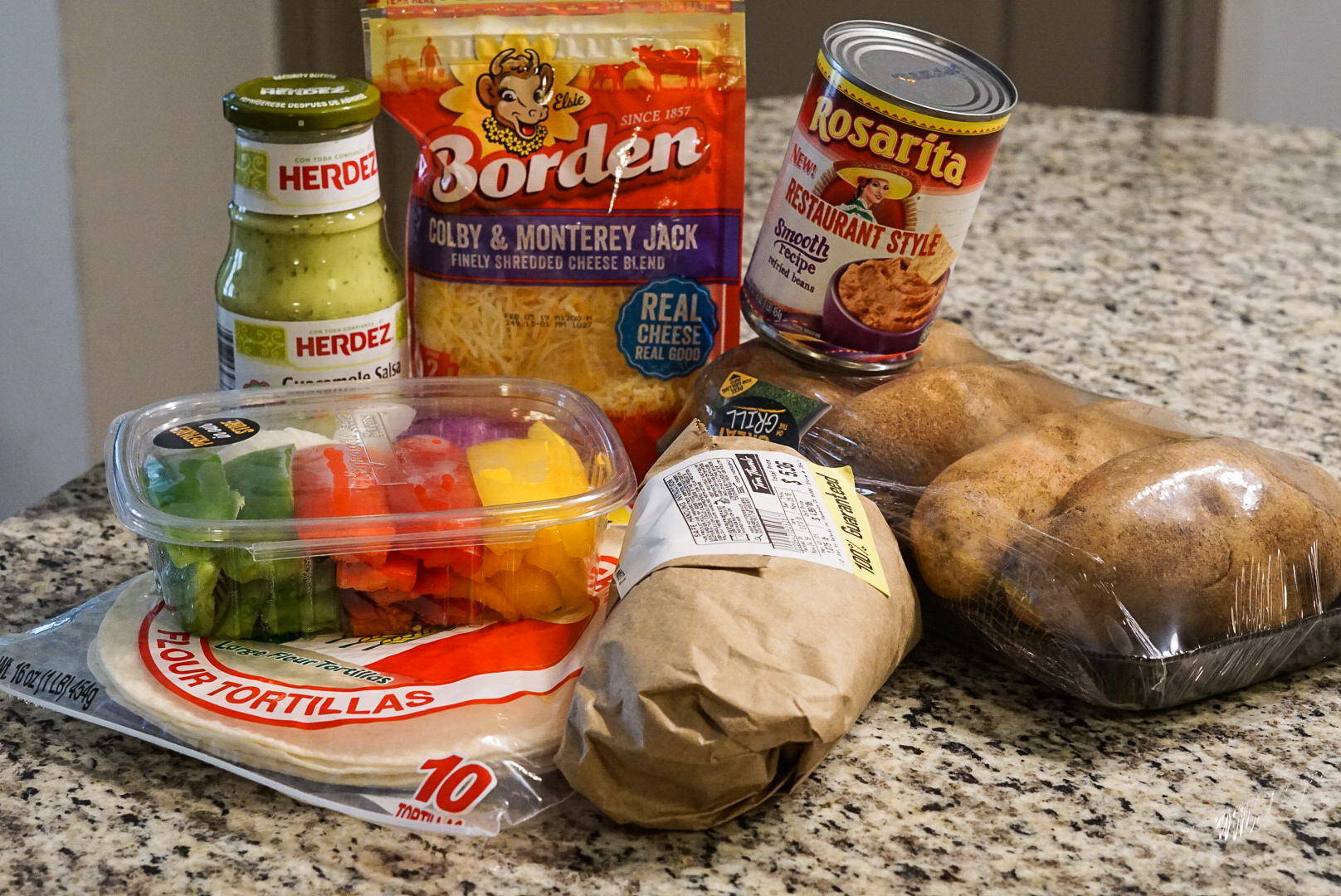 Here is everything that you will need (feel free to add whatever you like): Eggs, Salsa, Cheese, Potatoes, Onions, Bell Peppers, Refried Beans, Minced Garlic, Tortillas (Burrito Size), Ground Beef (You could do Bacon, Chorizo, or any type of breakfast meat you prefer), Black Pepper, Salt, Garlic Powder, and Cayenne Pepper. 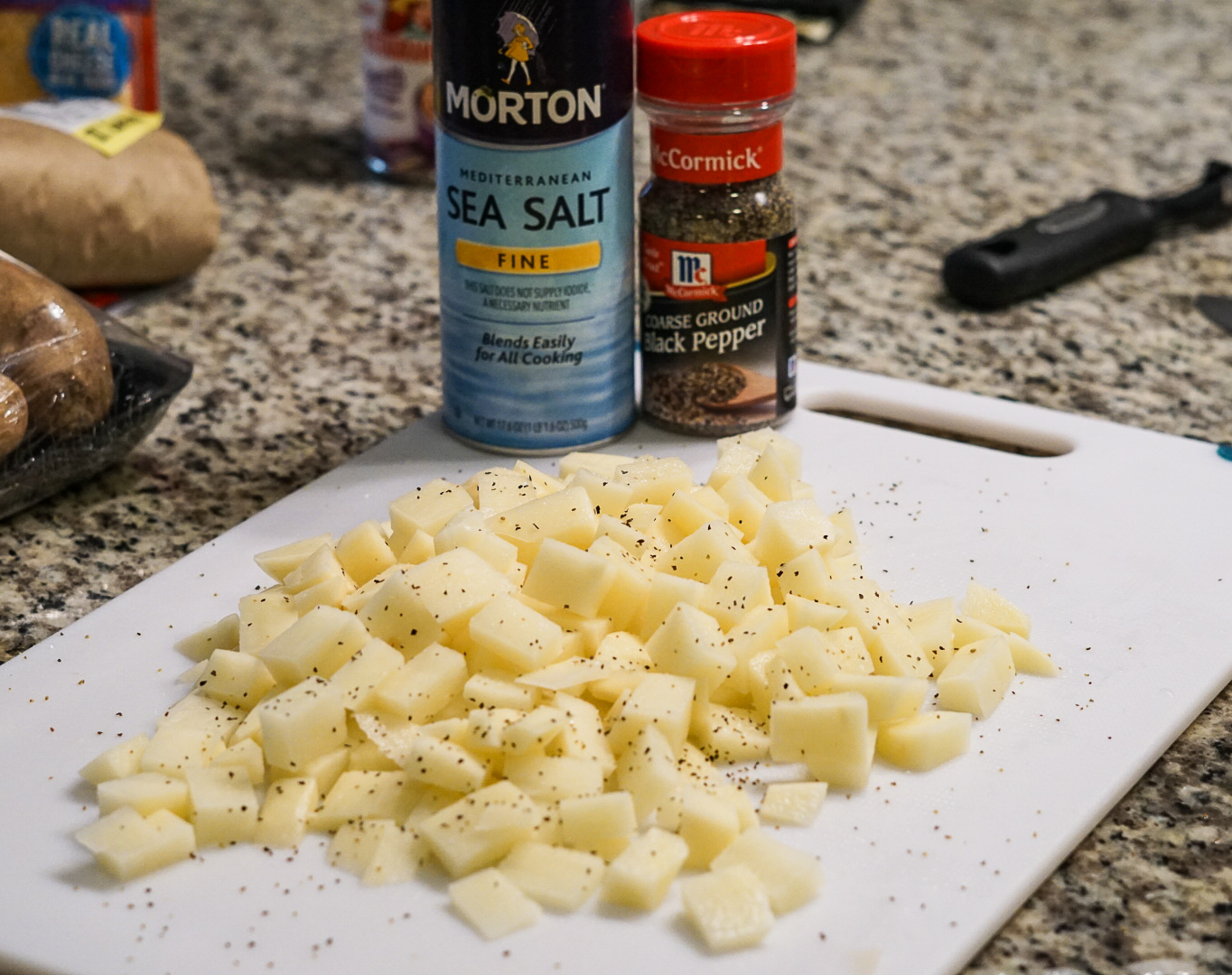 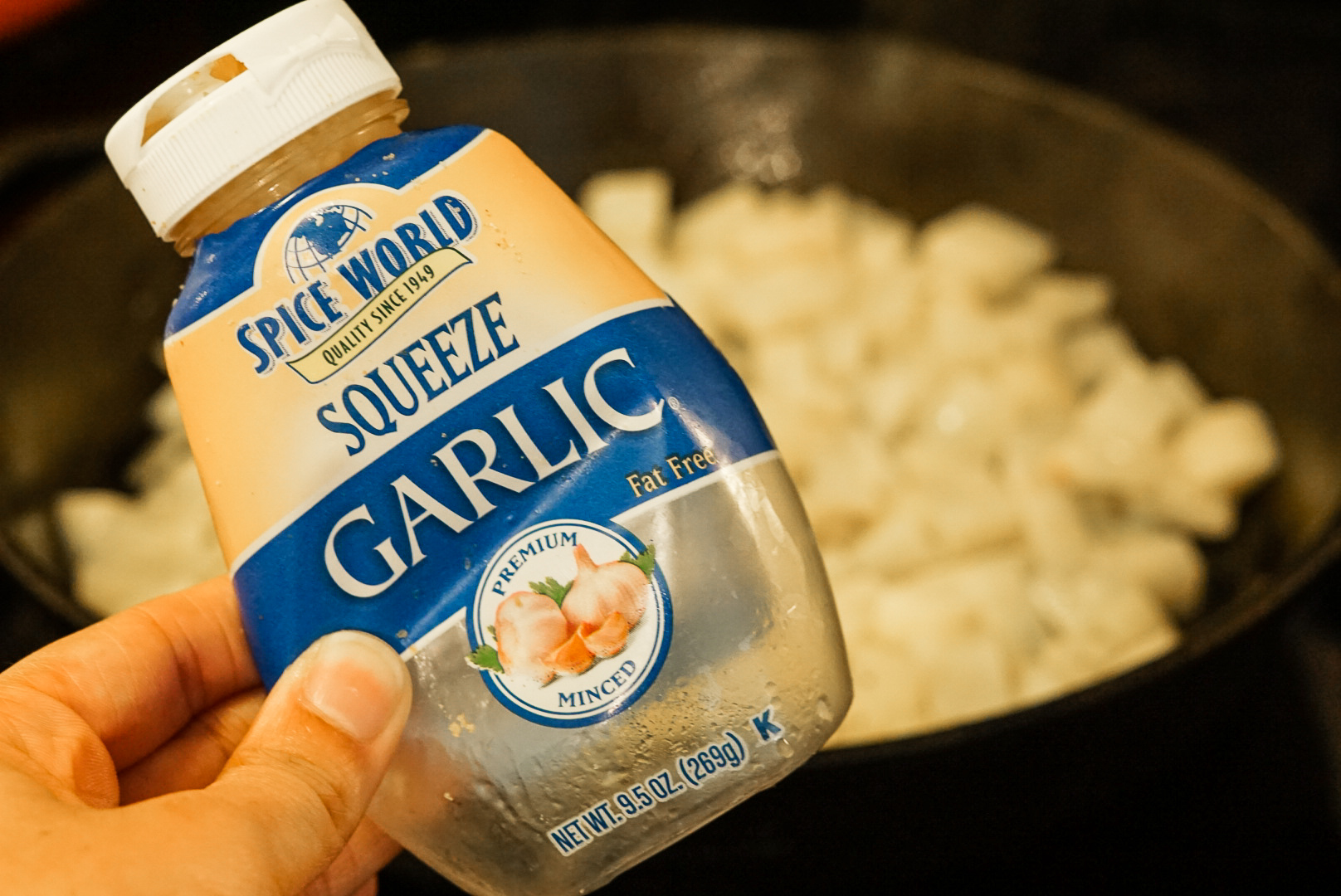 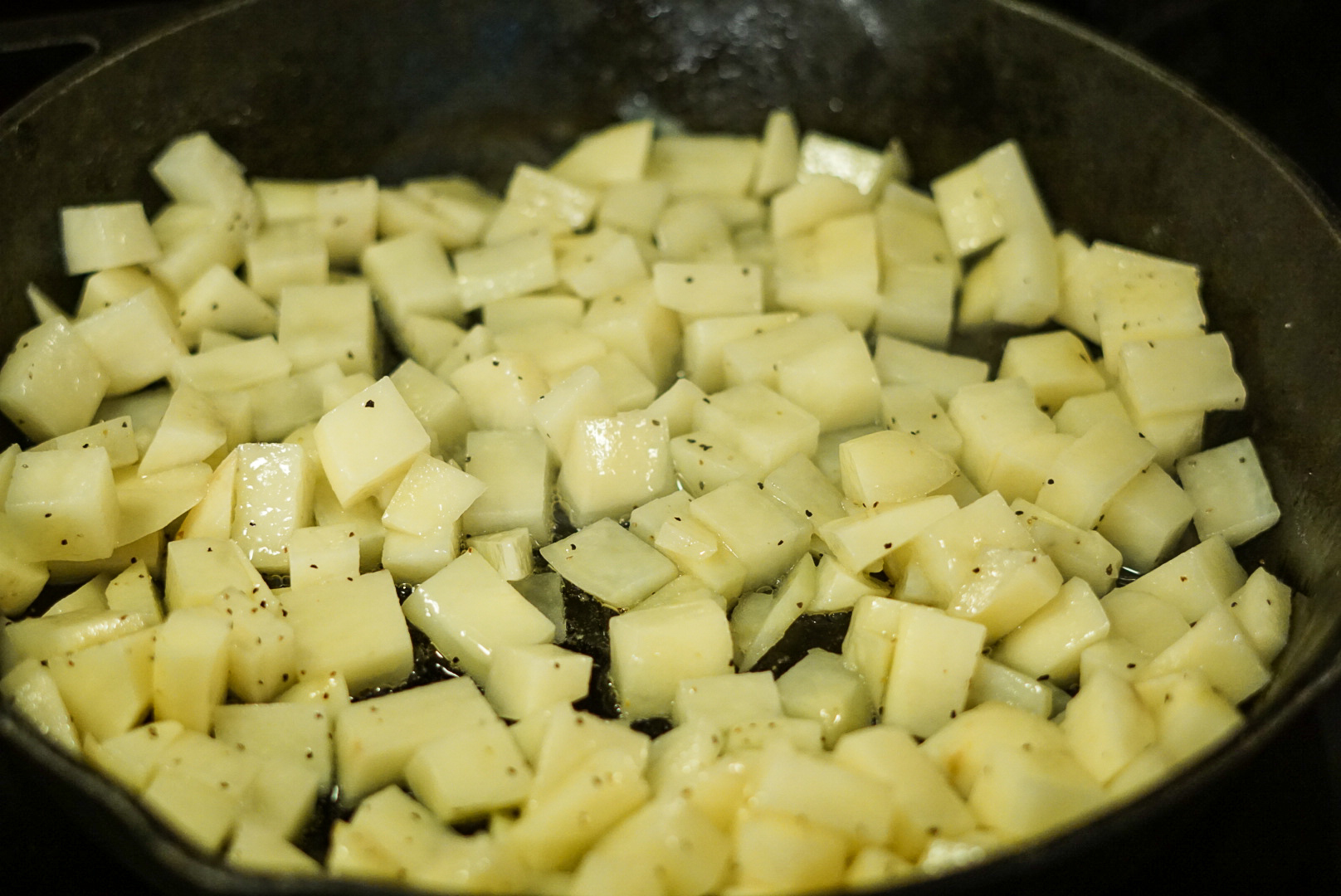 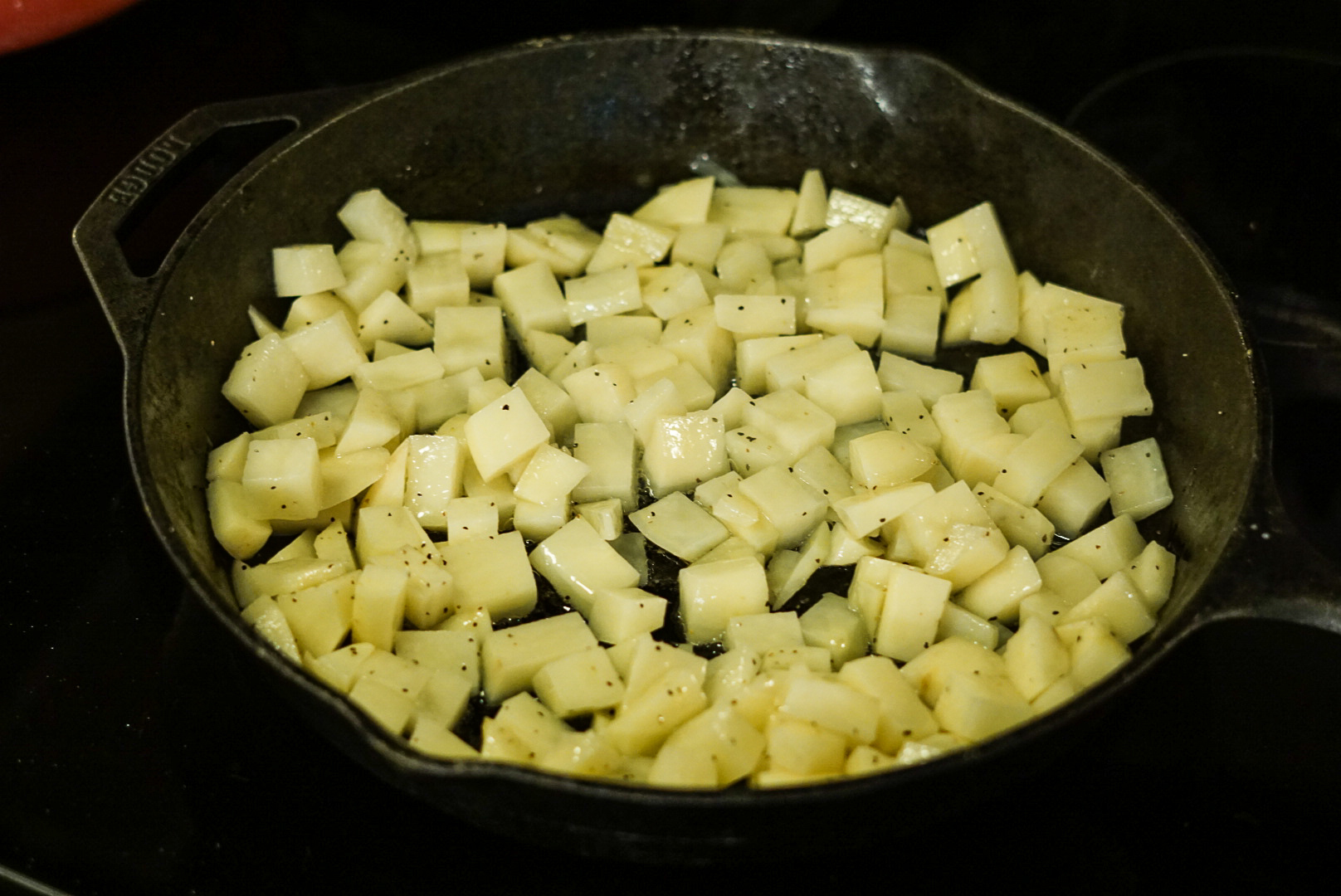 The list is a bit long, but I promise it is worth it! So I started the whole process by peeling two potatoes and then rinsing them to remove all the dirt. After I rinsed them, I placed the two potatoes on a cutting board and proceeded to cut them into small little squares as if you were making some fried potatoes. After they are all cut up, I get a napkin and soak up all the excess water that is in the potatoes already. This step is huge because you don’t want your potatoes to be dripping wet because 1.) water and oil don’t mix & 2.) It makes cooking the potatoes so much faster. I may or may not have learned from personal experience, but we won’t discuss that lol. Anywho, after you dry the potatoes off, then you want to season them all with some salt and pepper. Once that is done, you can place your pan on the stove and start preheating the oil and butter so that you can place the chopped up potatoes in it. I also added some minced garlic into the pan to help give the potatoes some flavor. 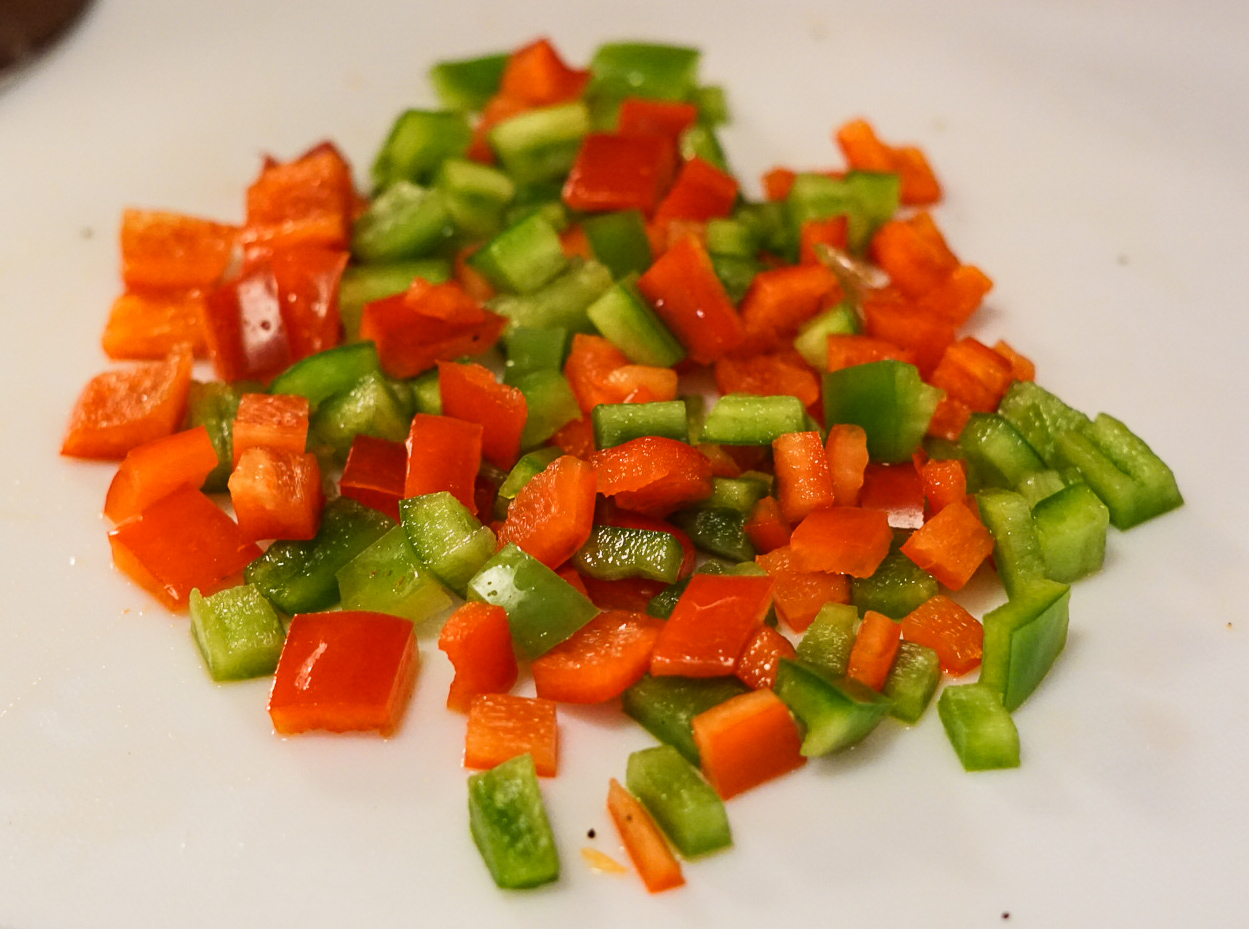 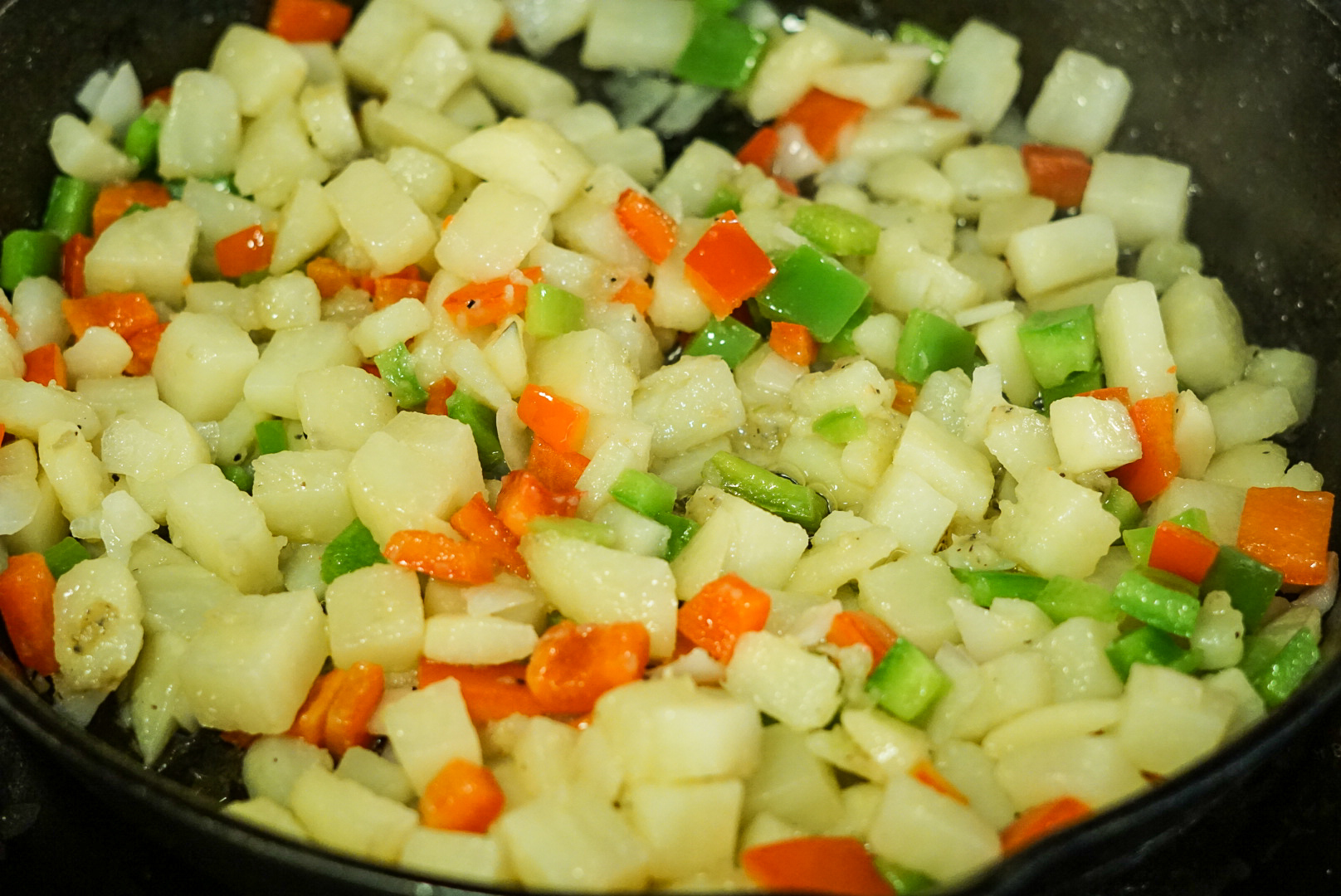 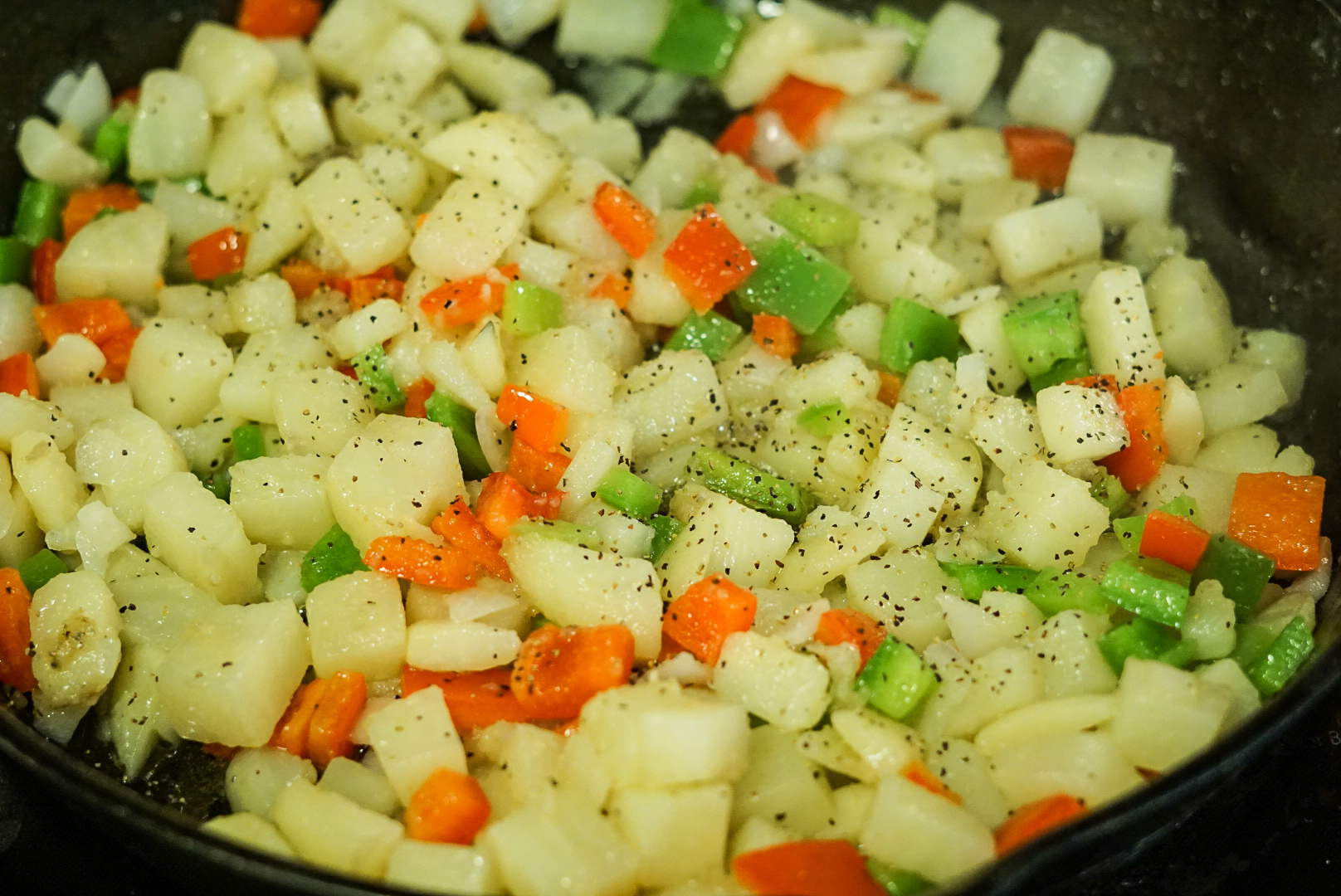 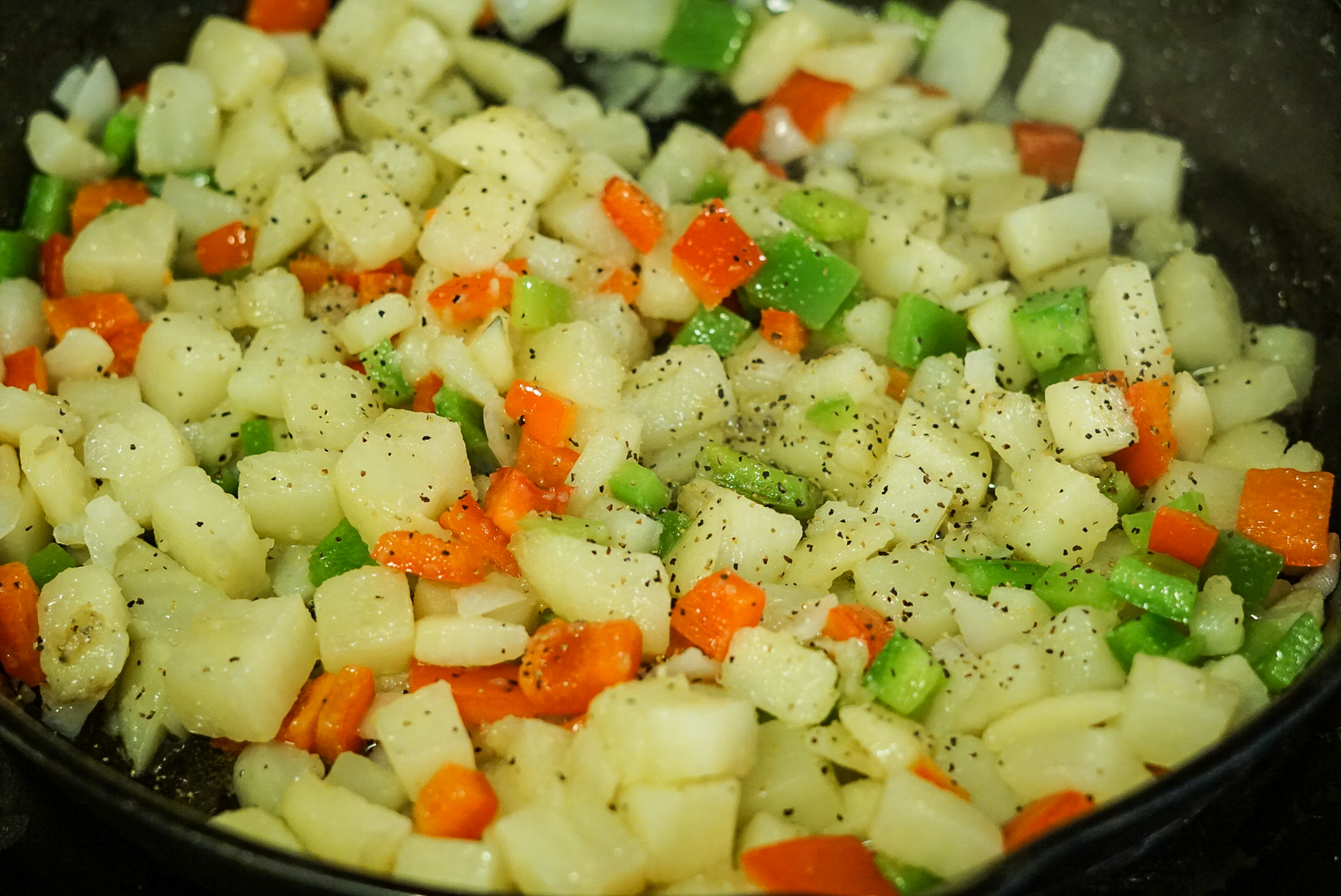 While the pan is getting hot on the stove, I went ahead and chopped up my bell peppers and onion. I used a white onion along with a red and green bell pepper because I feel like they just all flow together better. I cut the peppers and onions and little tiny squares and then I put them to the side and just let them chill until they are ready to be mixed in with the potatoes.

After our pan has melted our butter and oil, then you will want to go ahead and put the potatoes in and let them cook. I cooked the potatoes first because I knew that they would take the longest, so I wanted to cook everything else last so it’s all nice and hot. I’d honestly start the potatoes process about 15 – 20 minutes earlier than the rest of the meal because that will give the taters a nice little cook start. Once I hit that 15-minute mark, I went ahead and added the bell peppers and onions to that they could start flavoring the potatoes and so that they could be sautéed with the taters. Make sure that you are watching and that you are stirring the potatoes quite often because you don’t want them to stick to the pan. 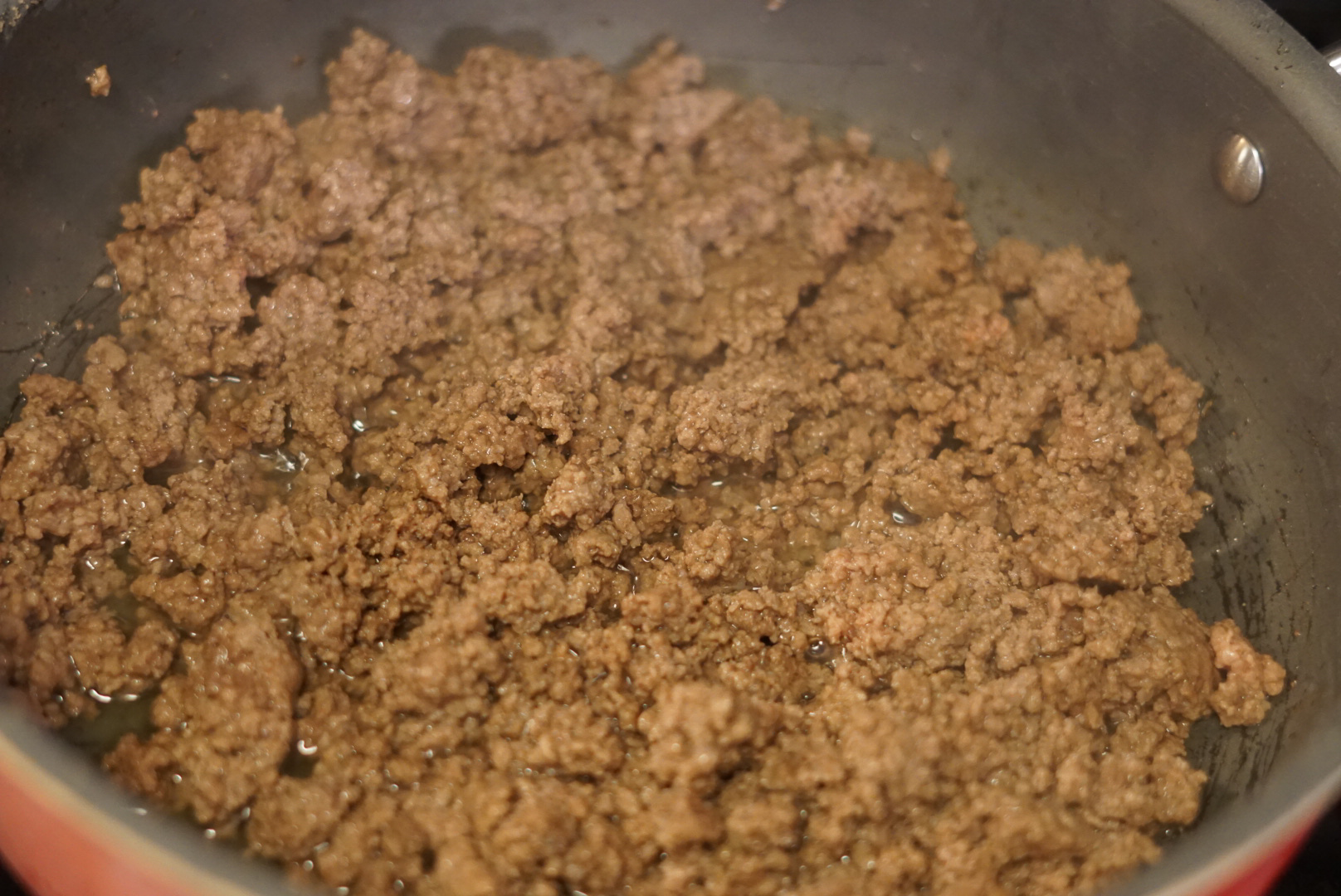 So while the potatoes are cooking, maybe 10 -15 minutes into the cooking, I will go ahead and start cooking the ground beef in a separate skillet. I usually cook the ground beef on a medium temperature and will cook it until I see no more pink in any of it. After it is done cooking, I drain it and then season it with some salt, pepper, and a little bit of lawrys to give it just a little bit of flavor. You don’t want to season it too heavy because you will have so many other flavors that will compliment it and bring out the true flavor. So after you season it, just set it aside and let it rest till the rest of the food is done.

I usually like to cook the refried beans and the eggs last while the potatoes, peppers, and onions are finishing up their cooking process. I just grabbed a can of refried beans because only Fred eats them and it makes this breakfast process a bit simpler. I just put the beans in a little pot and warmed them up for about five minutes or so. At this point, I usually crack open about 4 to 5 eggs (perfect for the two of us) and I will add some salt and pepper in them. I scramble them all up and then set them to the side while I finish up the potatoes. 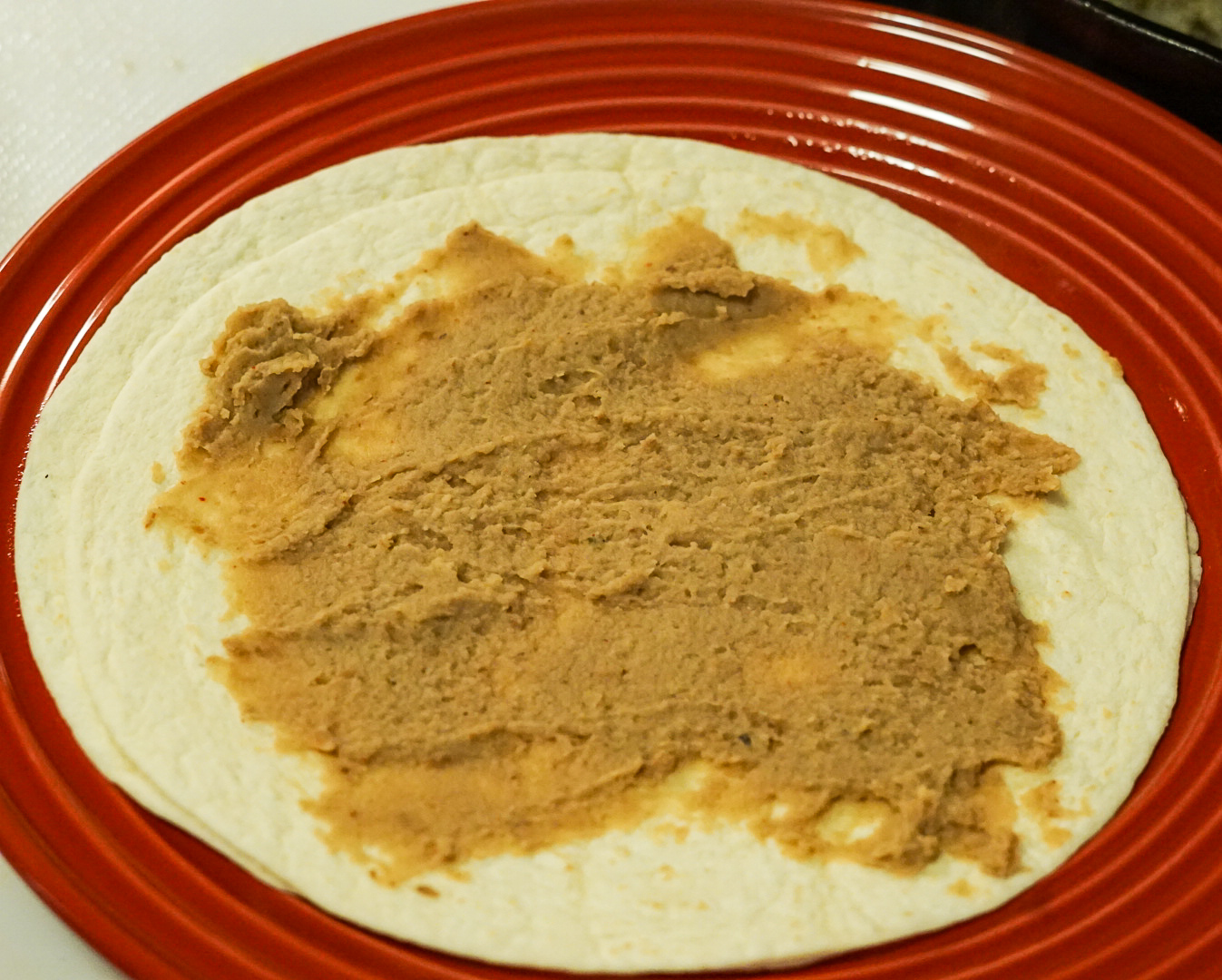 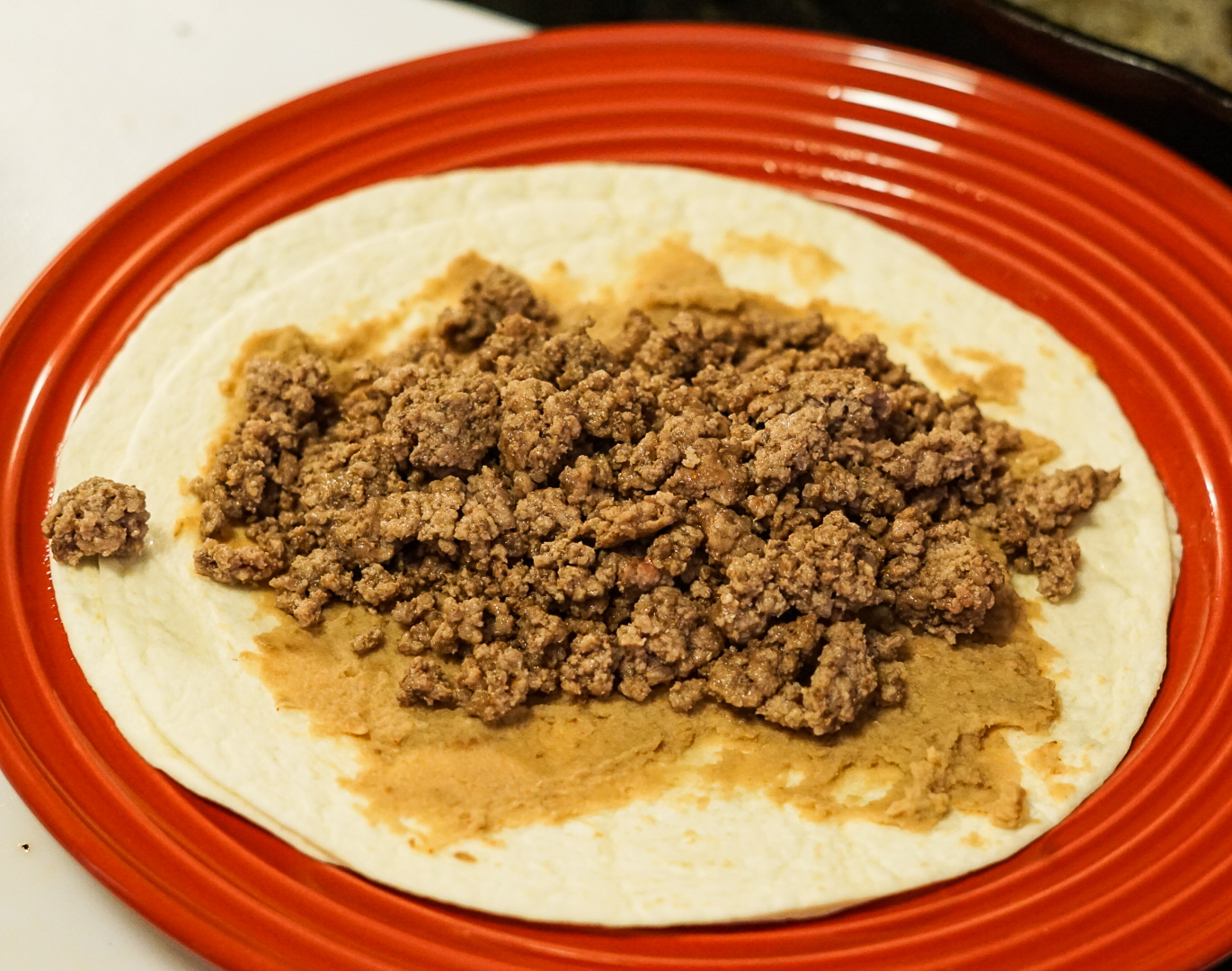 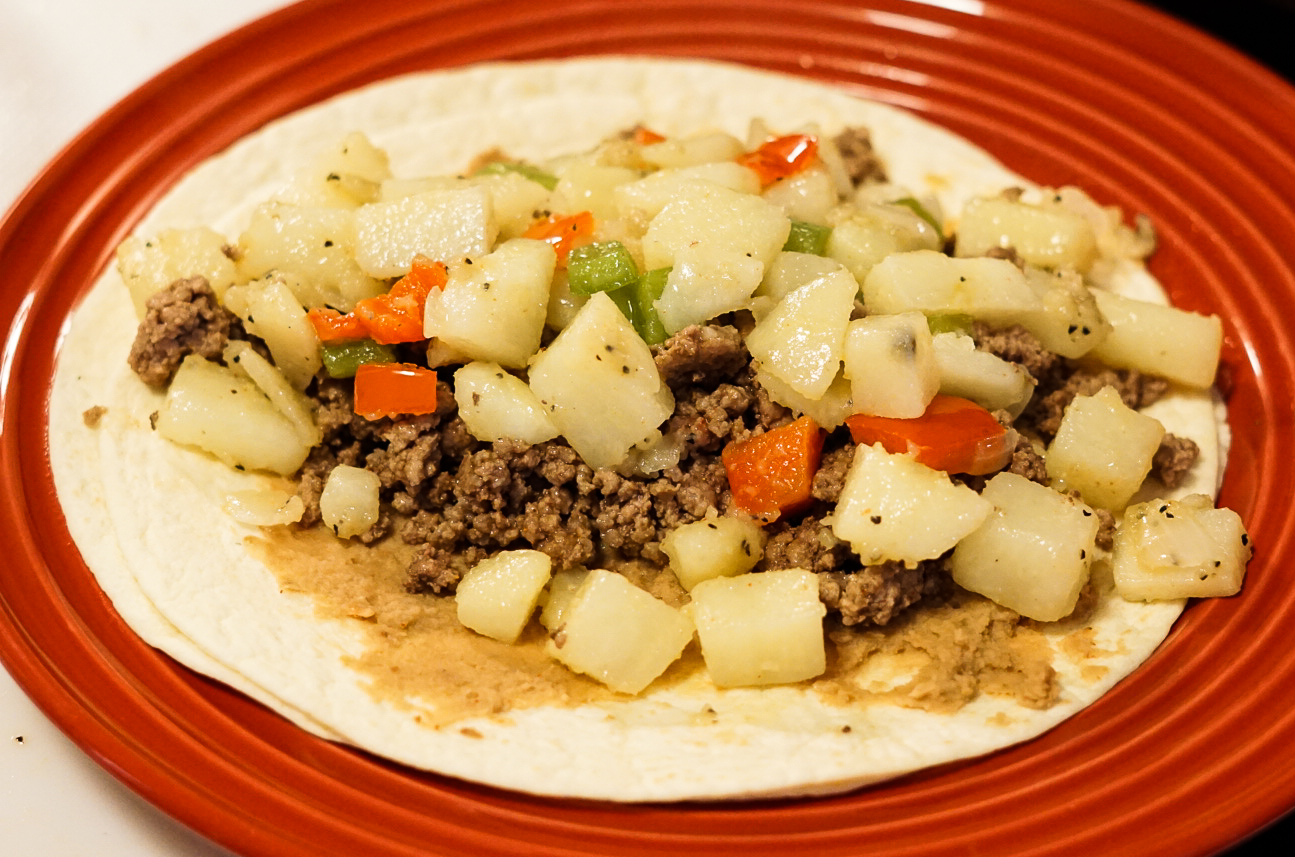 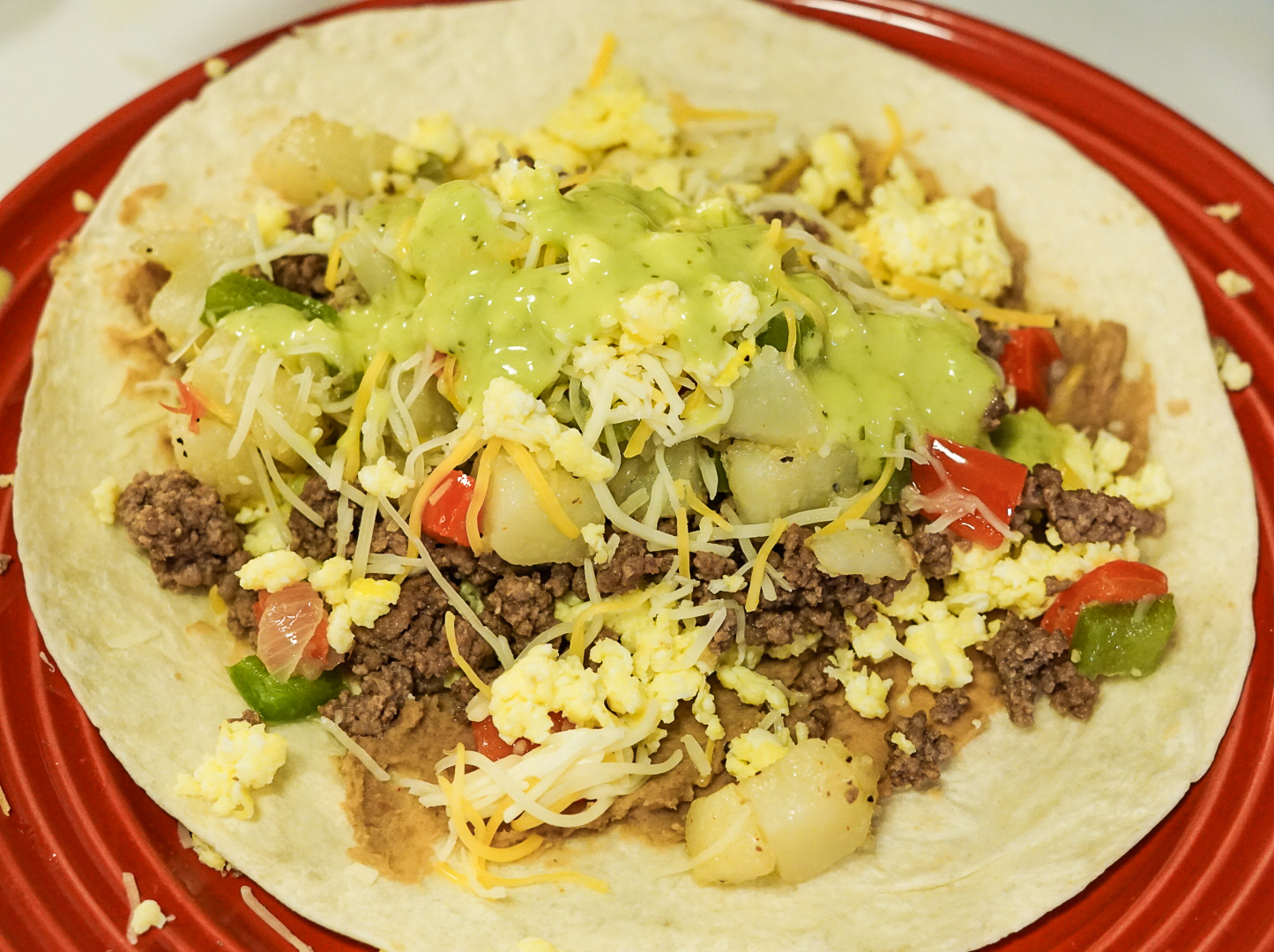 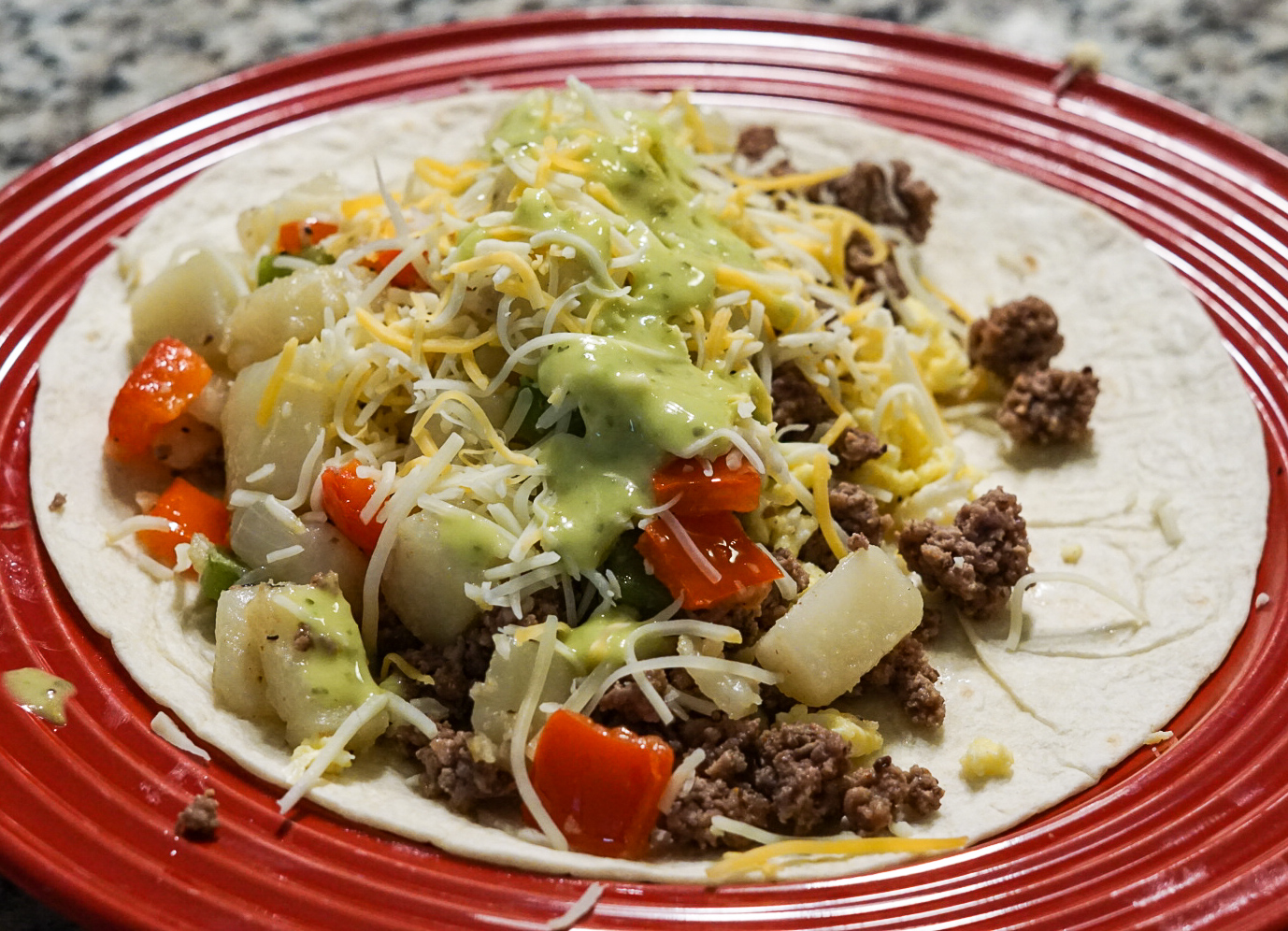 Now, the potatoes and peppers are complete and everything is officially ready to eat. Grab yourself a tortilla and go crazy! I’d start with the beans first, then the ground beef, eggs, potatoes, and then top it with some salsa and cheese and enjoy!! Yep, it’s that simple and delicious! I know it isn’t anything fancy, but it is something quick and delicious that anyone can throw together on an early morning during the week or even the weekend. The whole things takes about 30 minutes or so, so try it out and let me know what you think!

Anywho, thank you so much for stopping by my simple recipes and taking a read, it means a lot! I will be posting more recipes here soon for the Holidays, so make sure that you are subscribed so you don’t miss a beat. Happy Eats y’all!!