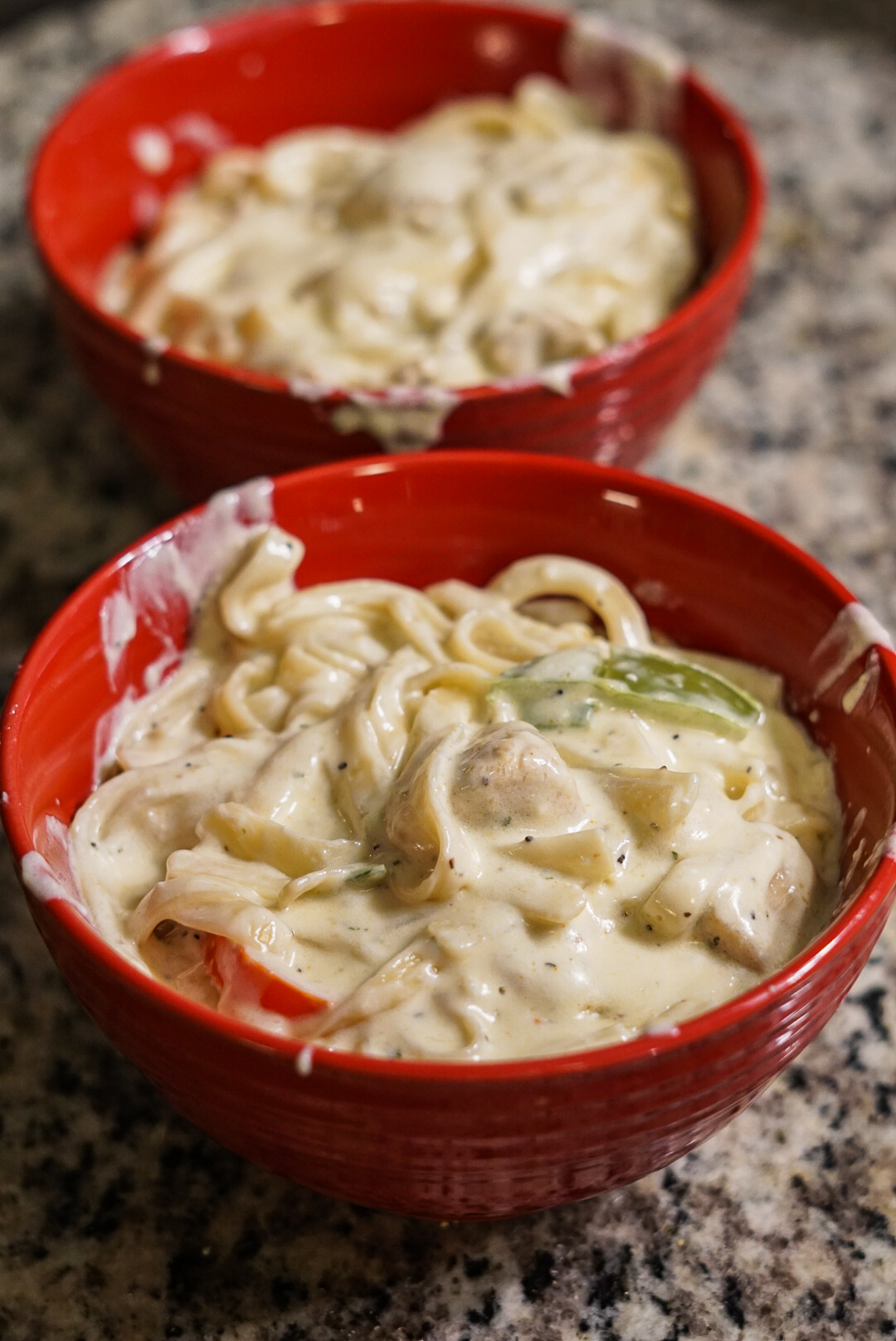 Happy Friday y’all!! I had something completely planned for the blog today, but I PERFECTED my Alfredo recipe and had to share all the details. I know Alfredo sauce is simple to make, but I have made Alfredo sauce so many times and it has never tasted this good! Even Fred said it tasted like it came from a restaurant and we all know he will not boost food unless it’s truly good lol. Here is everything you will need to complete this magical recipe! 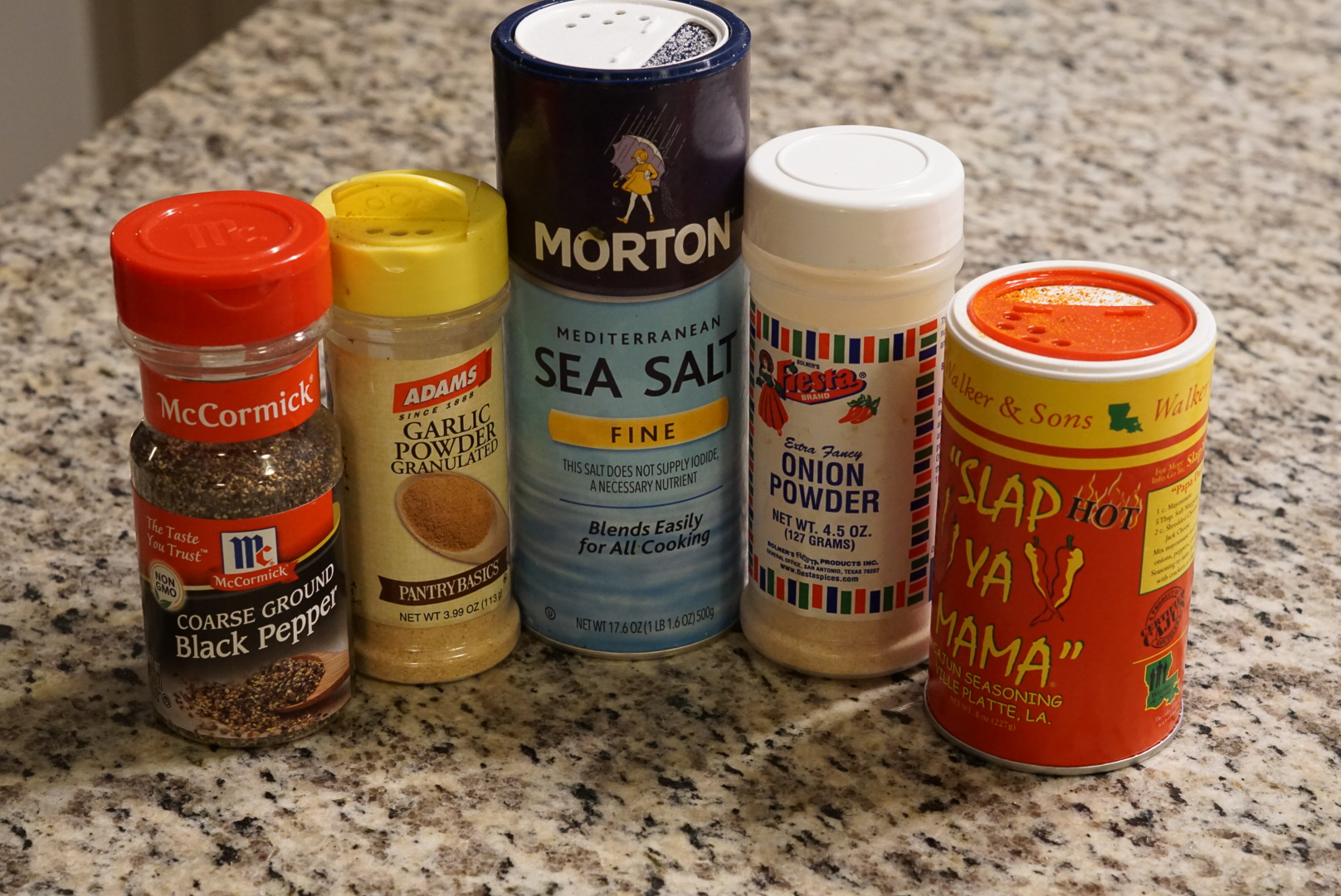 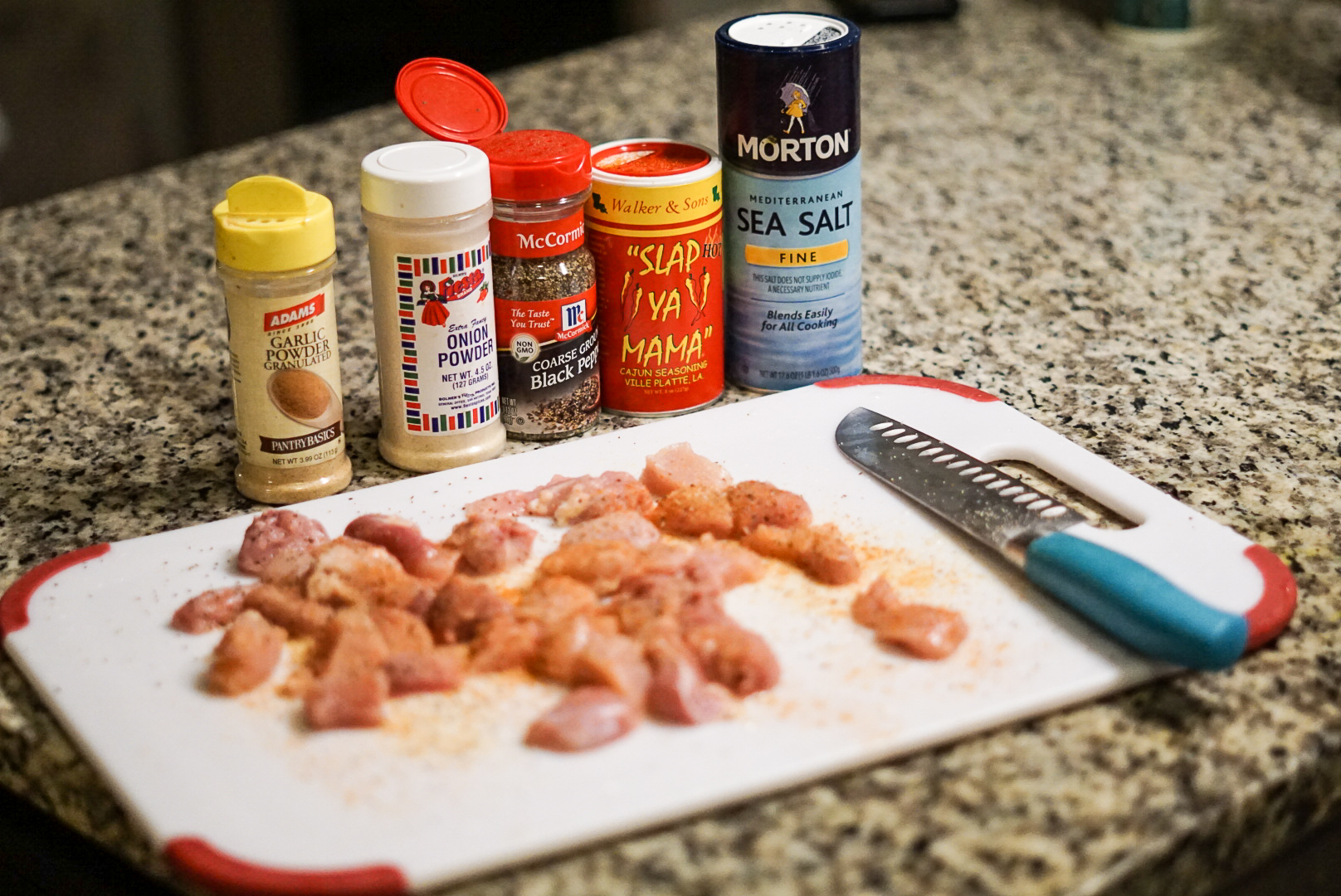 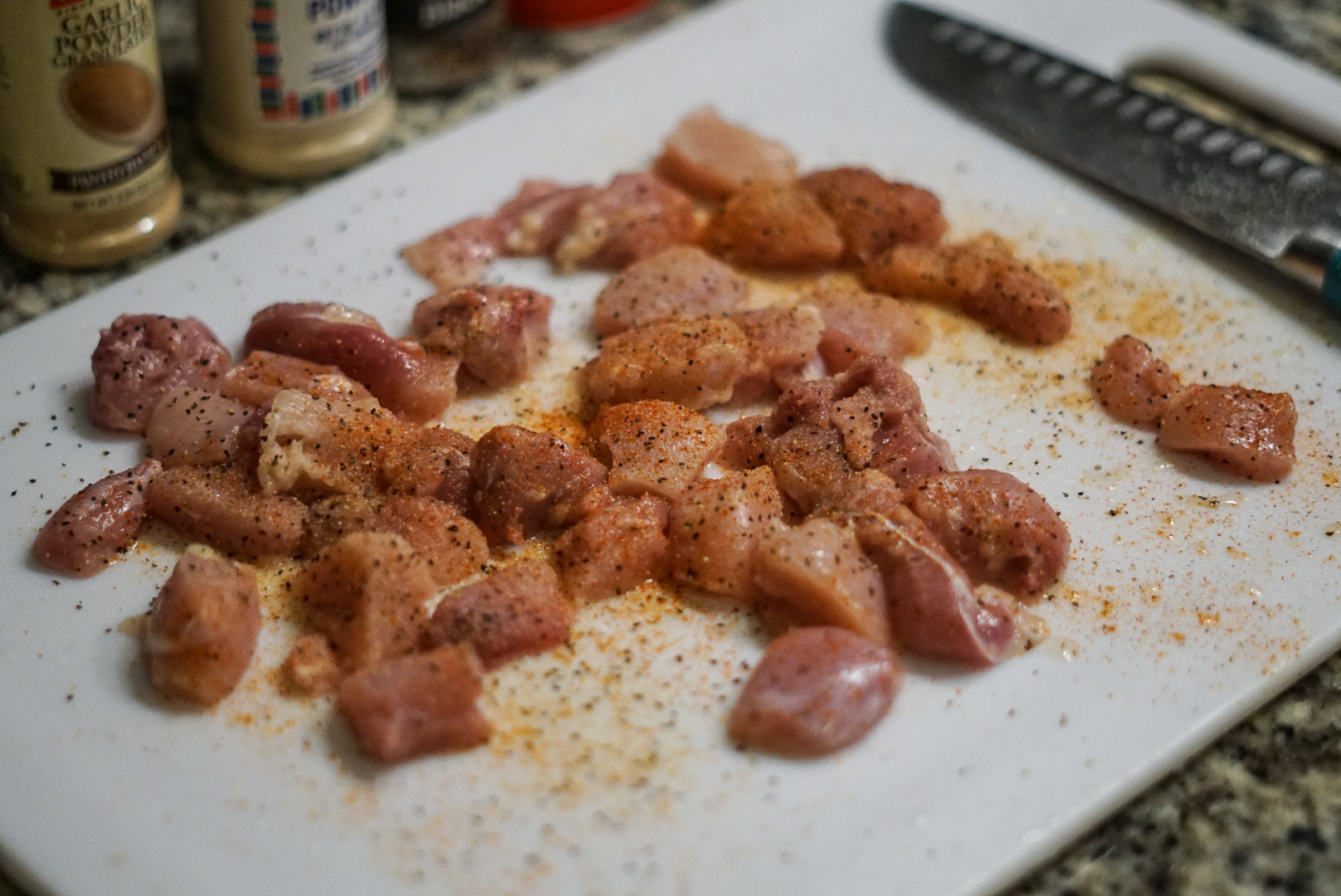 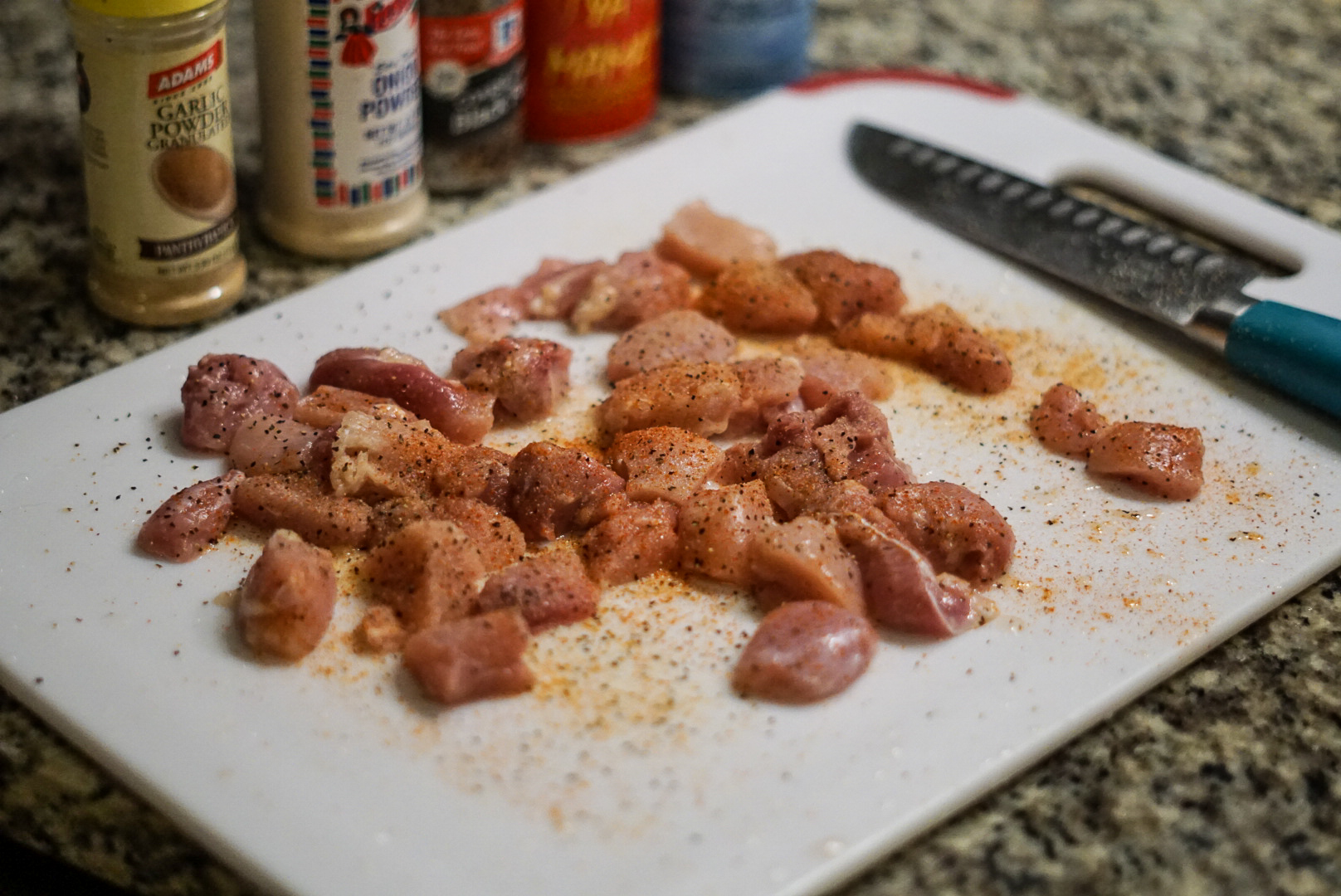 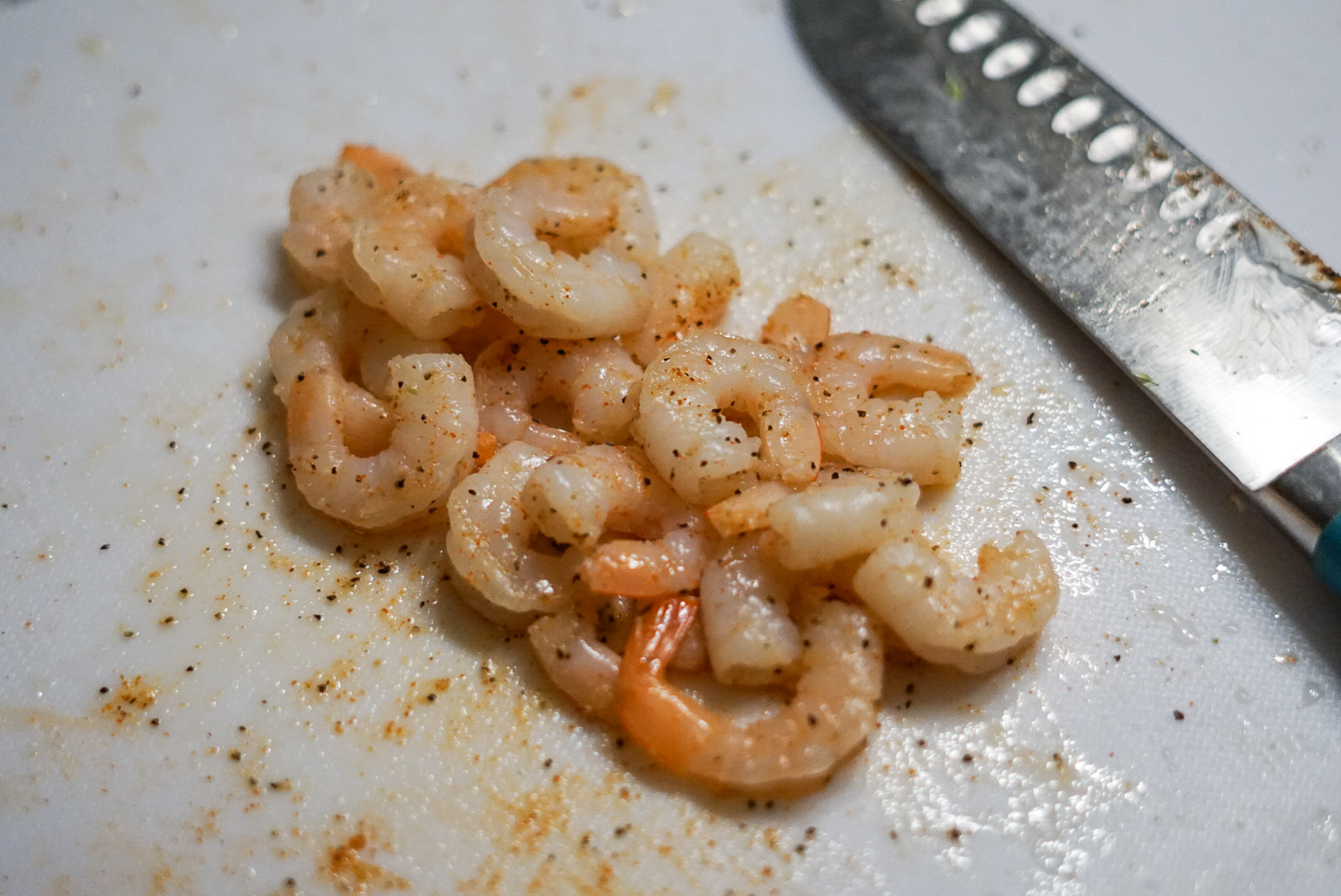 Ignore the one tail I didn’t take off before the picture was taken, it was removed before consumption lol

First, get you a pot and fill it with water to allow it to boil in preparation for the noodles. While the water for the pasta is boiling, you can start cooking the chicken. I started off by getting a medium sized pan and adding oil to let it prep for the chicken, and then I cleaned, cut, and seasoned my chicken into little squares. To season my chicken I used a little bit of slap ya mama, salt, black pepper, and garlic powder. I tossed it all around to make sure that each side was coated fully and then I set them aside until my pan was done heating. Once the pan is ready, go ahead and cook your chicken in the hot oil. I usually cook my chicken on medium-low to ensure that it doesn’t cook too fast on the outside. Once the chicken is almost done, then you will want to add in the bell peppers to sauté them. Cook until the chicken is completely finished, then remove it from the pan and place it to the side. 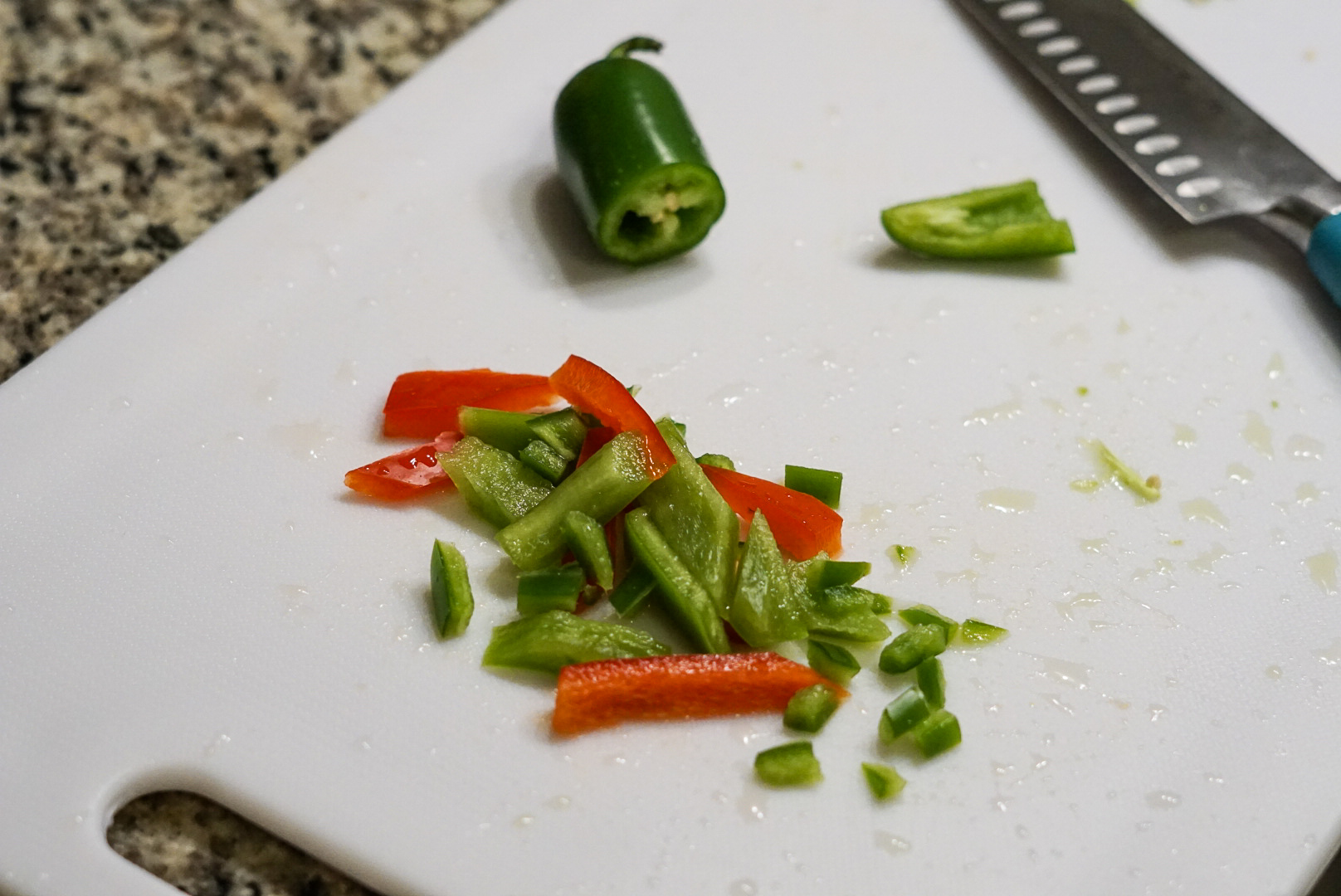 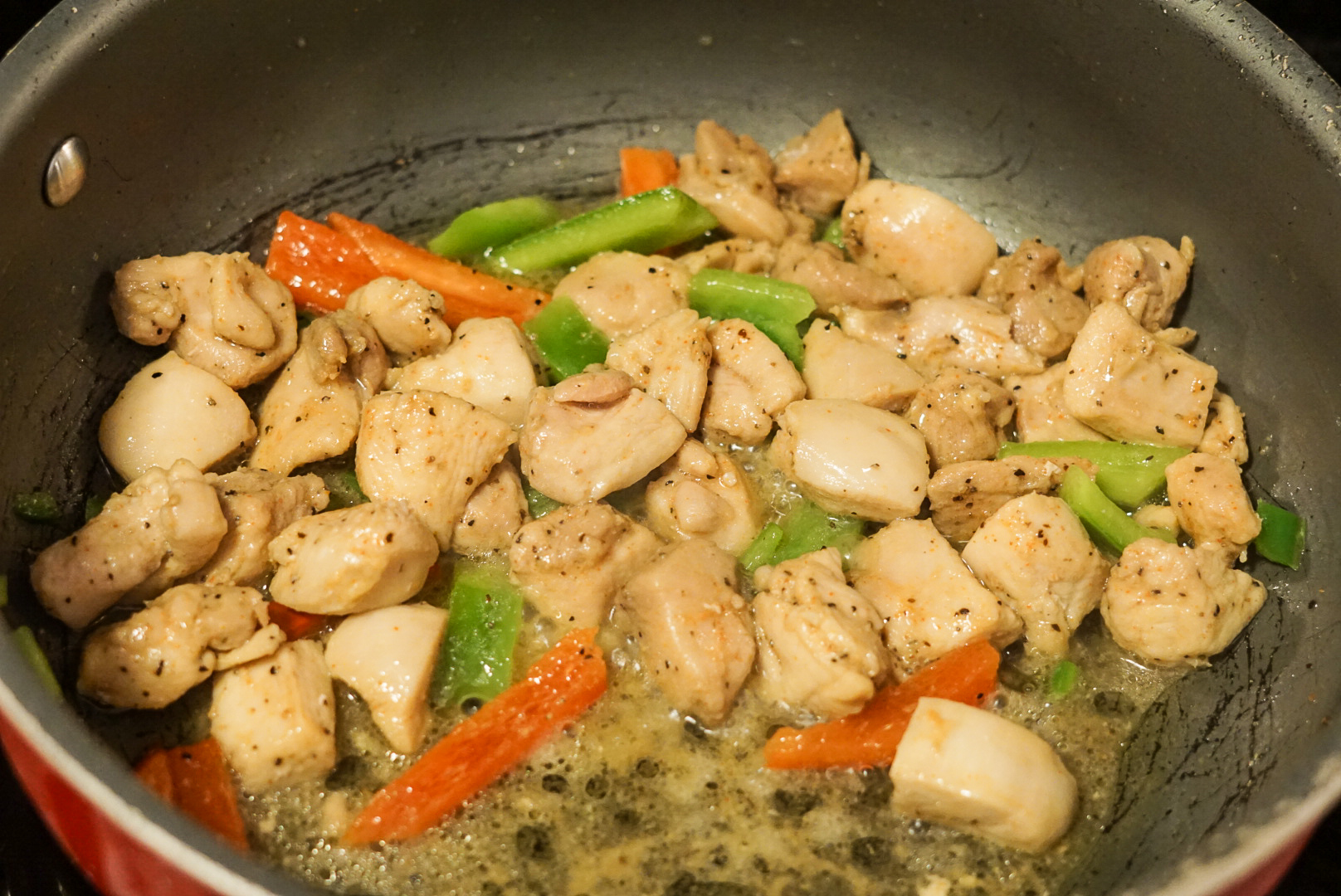 I also cooked a little bit of Shrimp for Fred as well. I took off the tails and then seasoned the shrimp with some slap ya mama, salt, pepper, and some garlic powder. I cooked it in a small skillet with a little bit of veggie oil and placed it into a bowl to wait for the sauce and pasta to be complete. **You can TOTALLY cook the chicken and shrimp together without a doubt! I’m just super picky and don’t like seafood, so I wanted to cook it separately.** 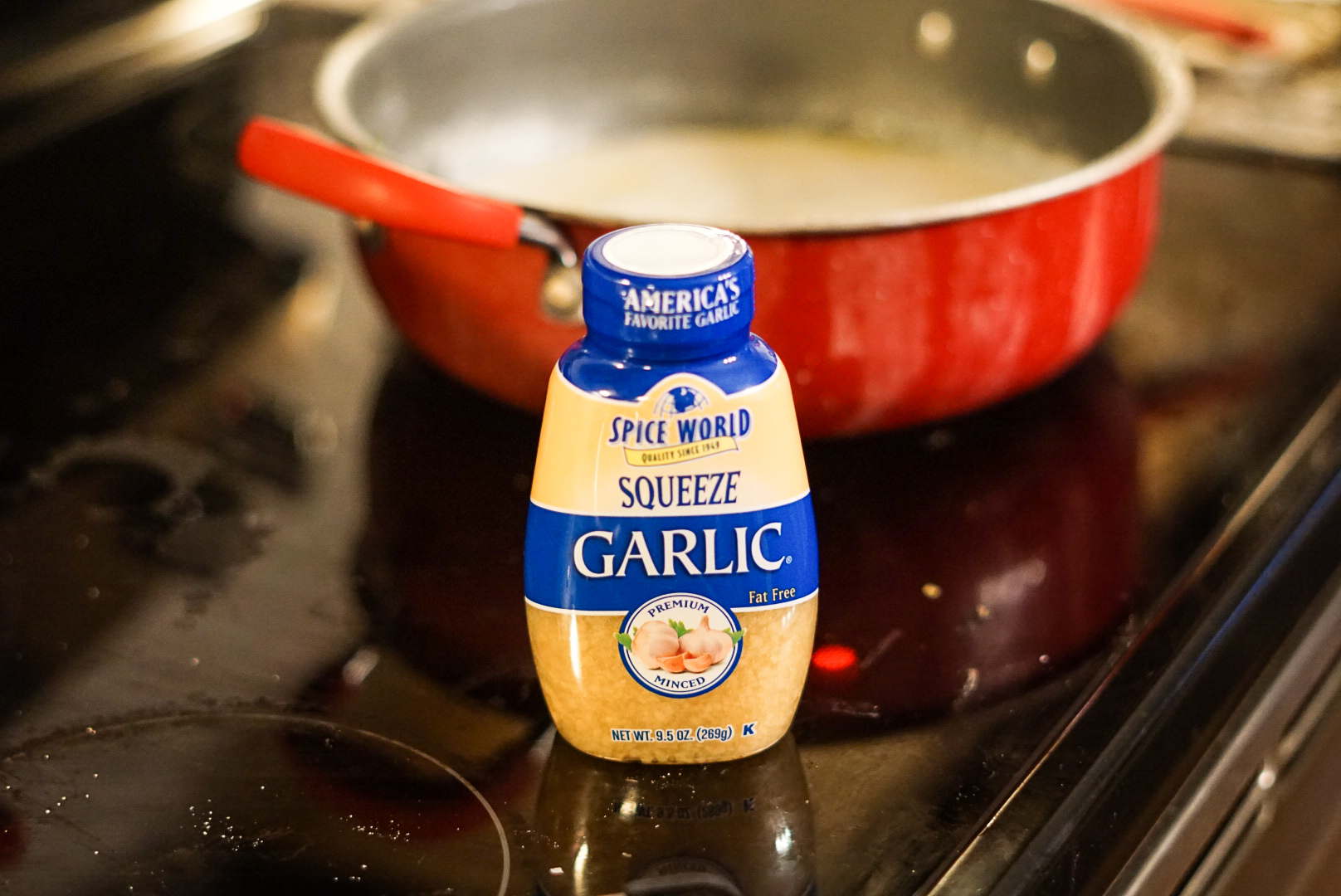 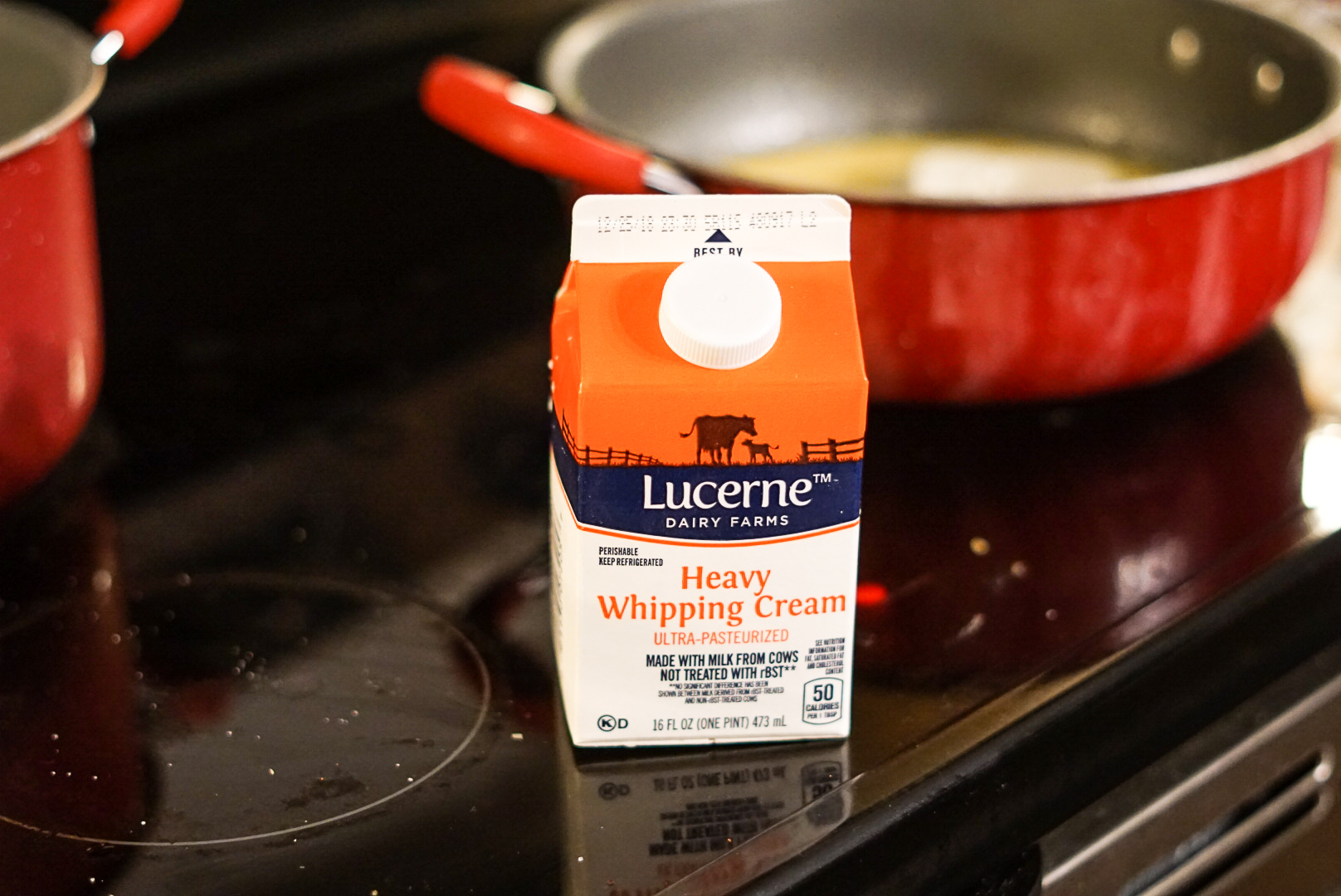 Anywho, In the same pan that you cooked the chicken and peppers in, you will want to add some minced garlic, about half of a spatula of butter (sorry for the poor measurement lol), a pint and a half of heavy whipping cream, and add about 6 – 7 ounces of cream cheese and let it all melt together. Keep your burner on medium-low and let it all melt together gradually so you avoid it burning at the bottom. You will want to be stirring the cream and butter together until it is all done and melted. Just keep stirring everything during the melting process because you don’t want it to stick to the bottom. 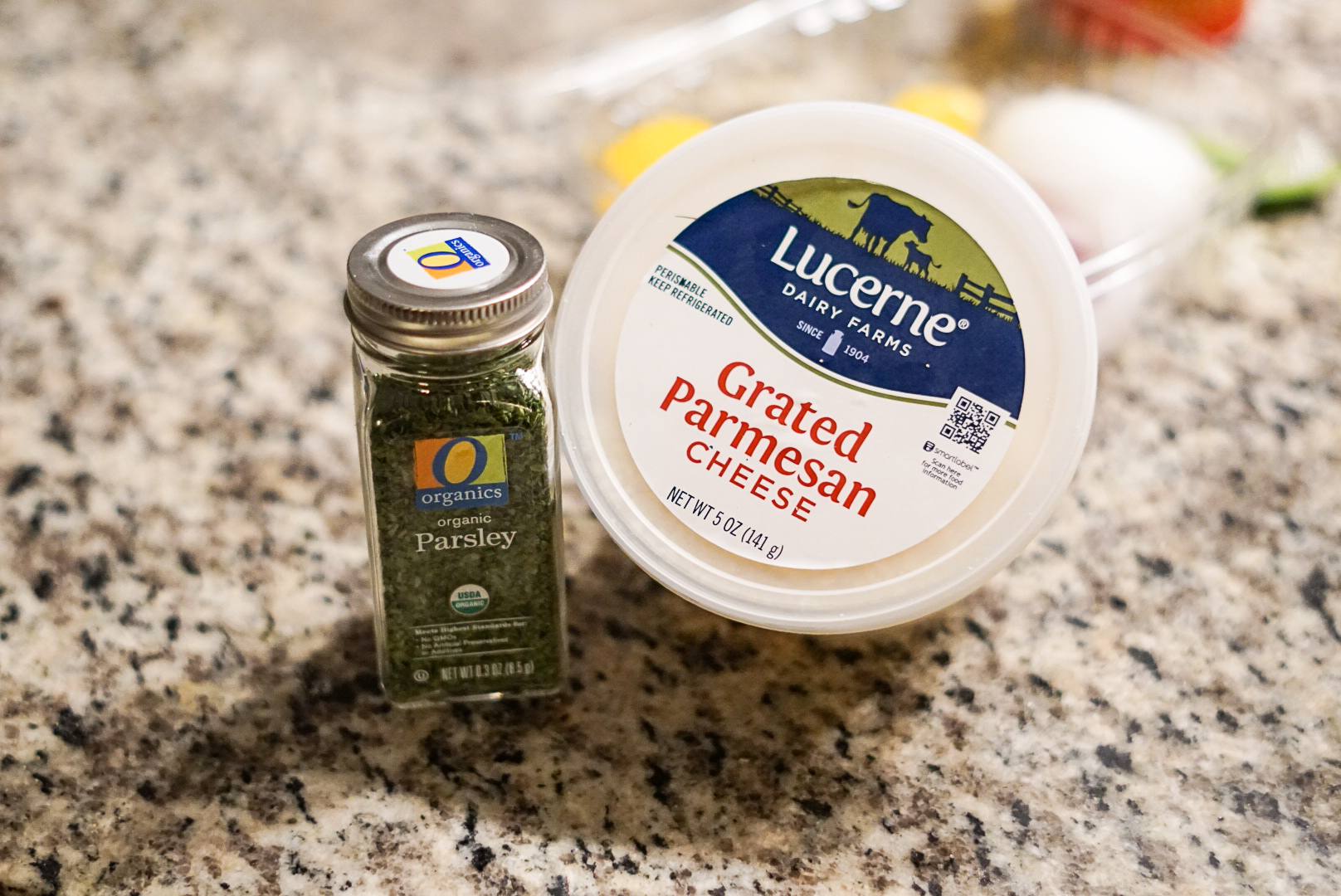 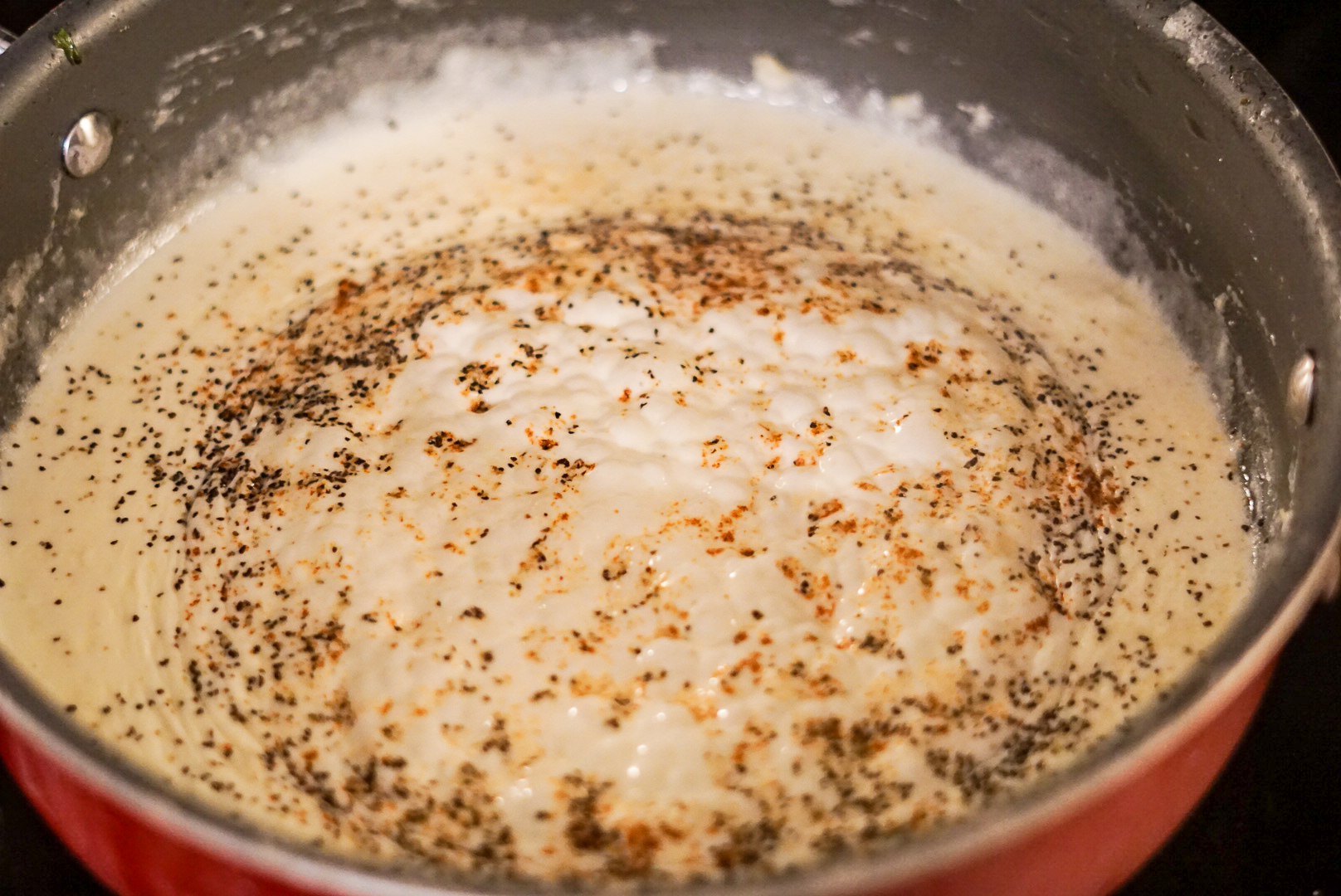 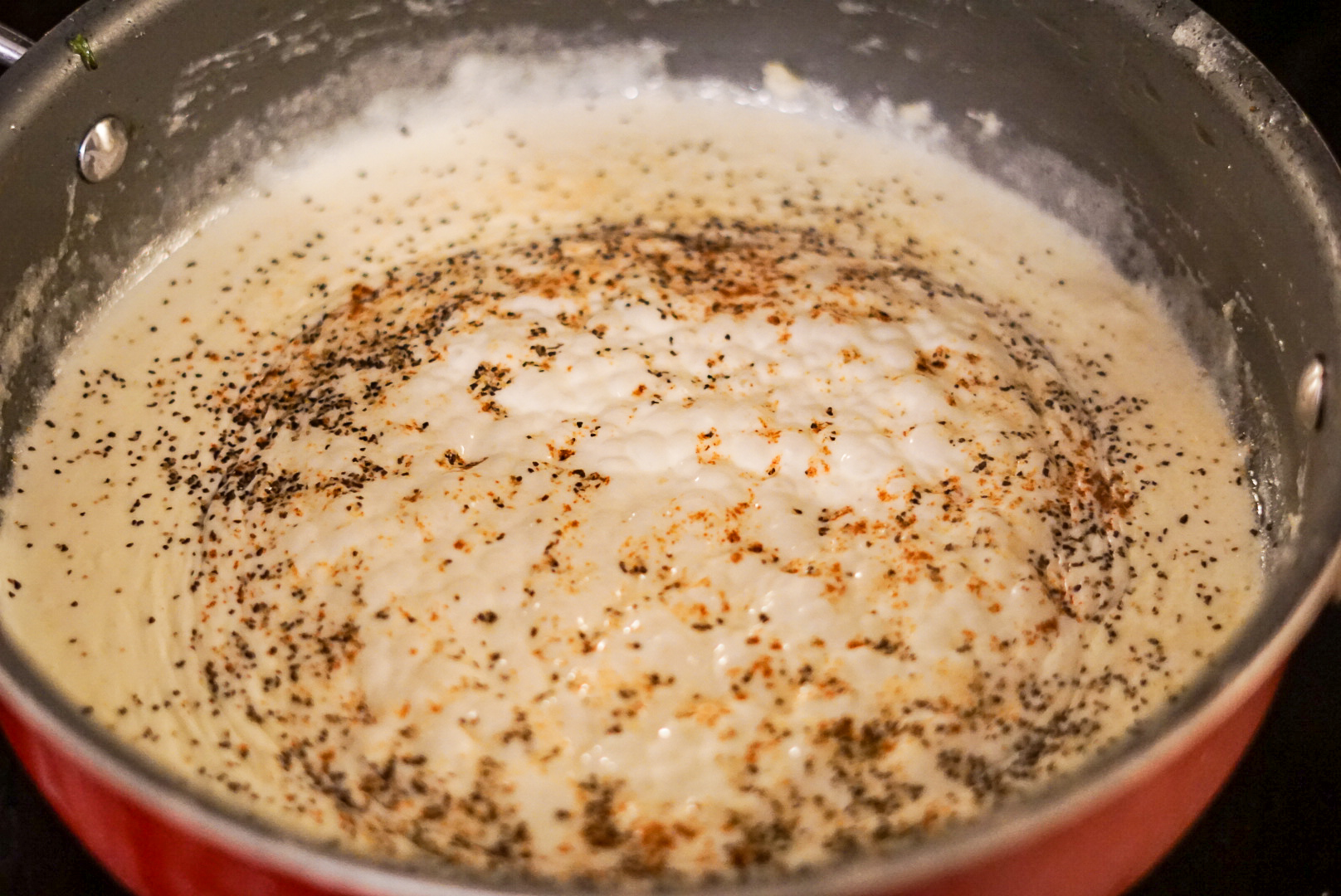 Once everything is melted, you will want to get about a cup and a half of the grated parmesan and add it into the melted mixture. You are going to want the cheese to sit at the top of the cream mixture for a couple of minutes to let it gradually melt into the sauce. After a couple of minutes, grab a whisk and whisk the cheese into the sauce. Keep whisking the mixture until the sauce has thickened up and most of the cheese has melted. Once the cheese has melted and the sauce has thickened, then you will want to season the sauce with salt, pepper, garlic powder, a pinch of cayenne pepper, some parsley, and a SPRINKLE of some garlic breadcrumbs. Yes, breadcrumbs. I’m not sure how but adding that pinch of garlic breadcrumbs changed the entire Alfredo sauce game. 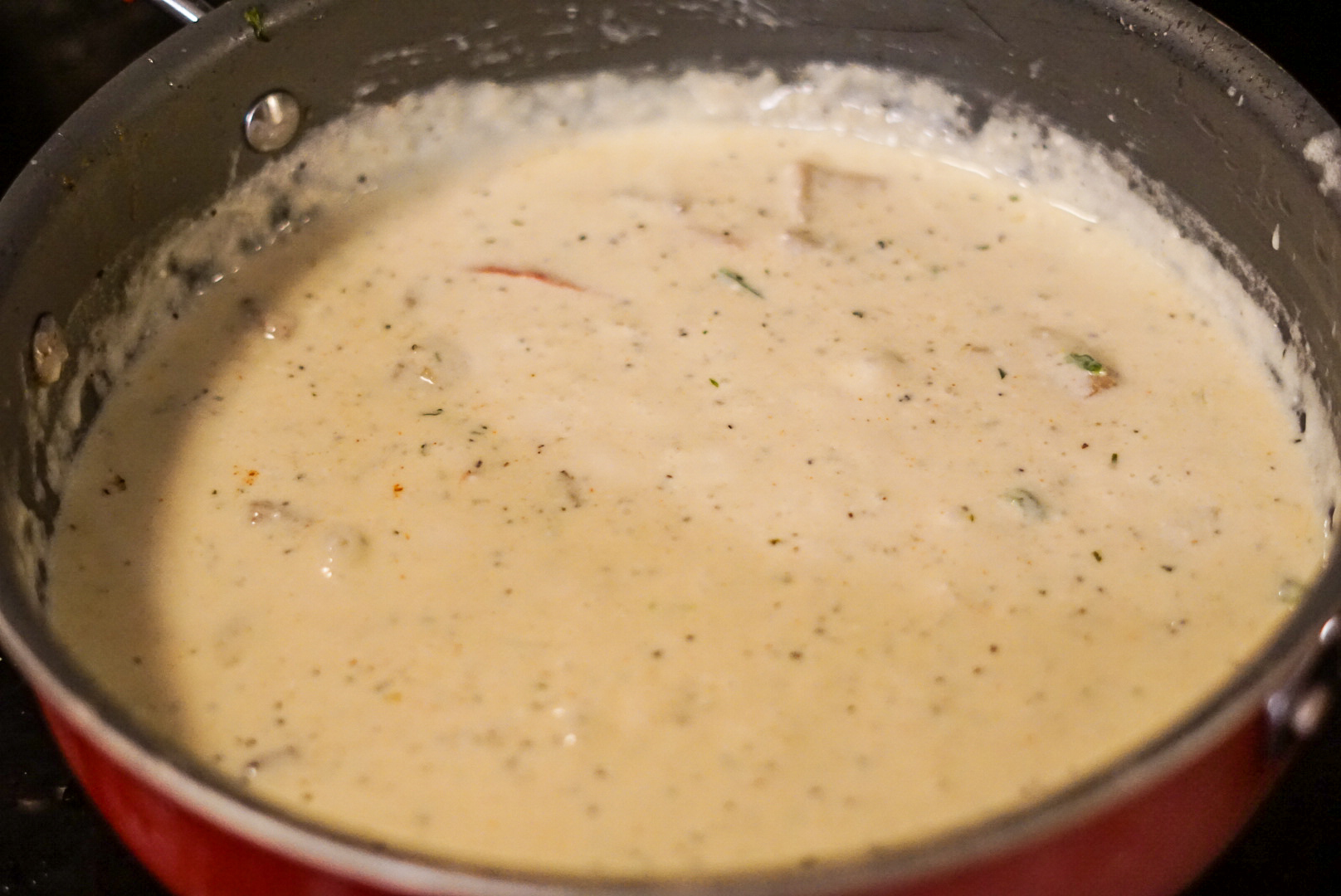 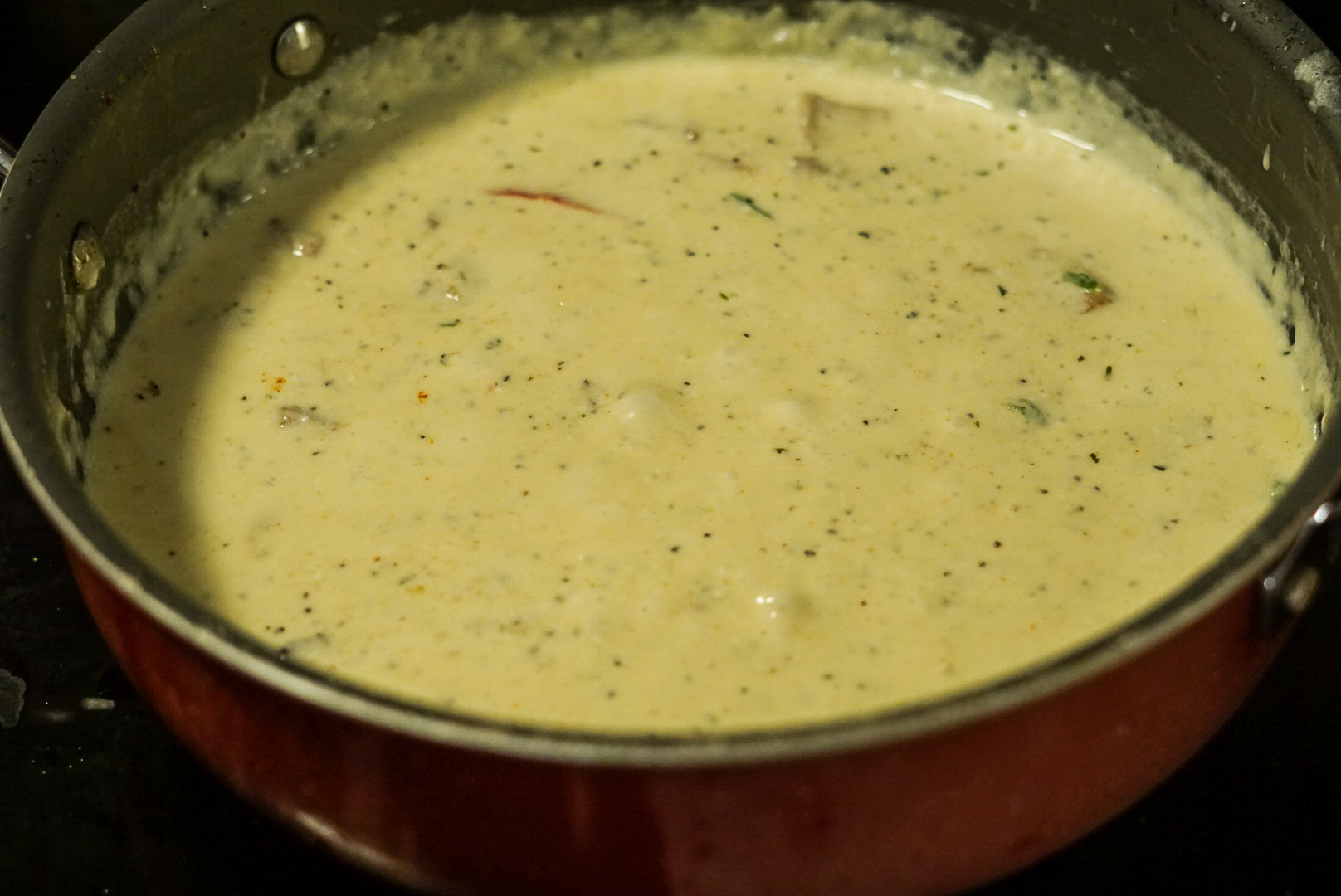 After mixing in all of the seasonings and perfecting that taste, then you are going to add the meat and bell peppers into the sauce. This part will allow the meat and peppers to warm back up a little bit and then it will also let the sauce absorb all the flavor from the peppers and meat. Just let it sit in the sauce for about three to five minutes and then just set it to the side while you dress your fettuccine pasta. 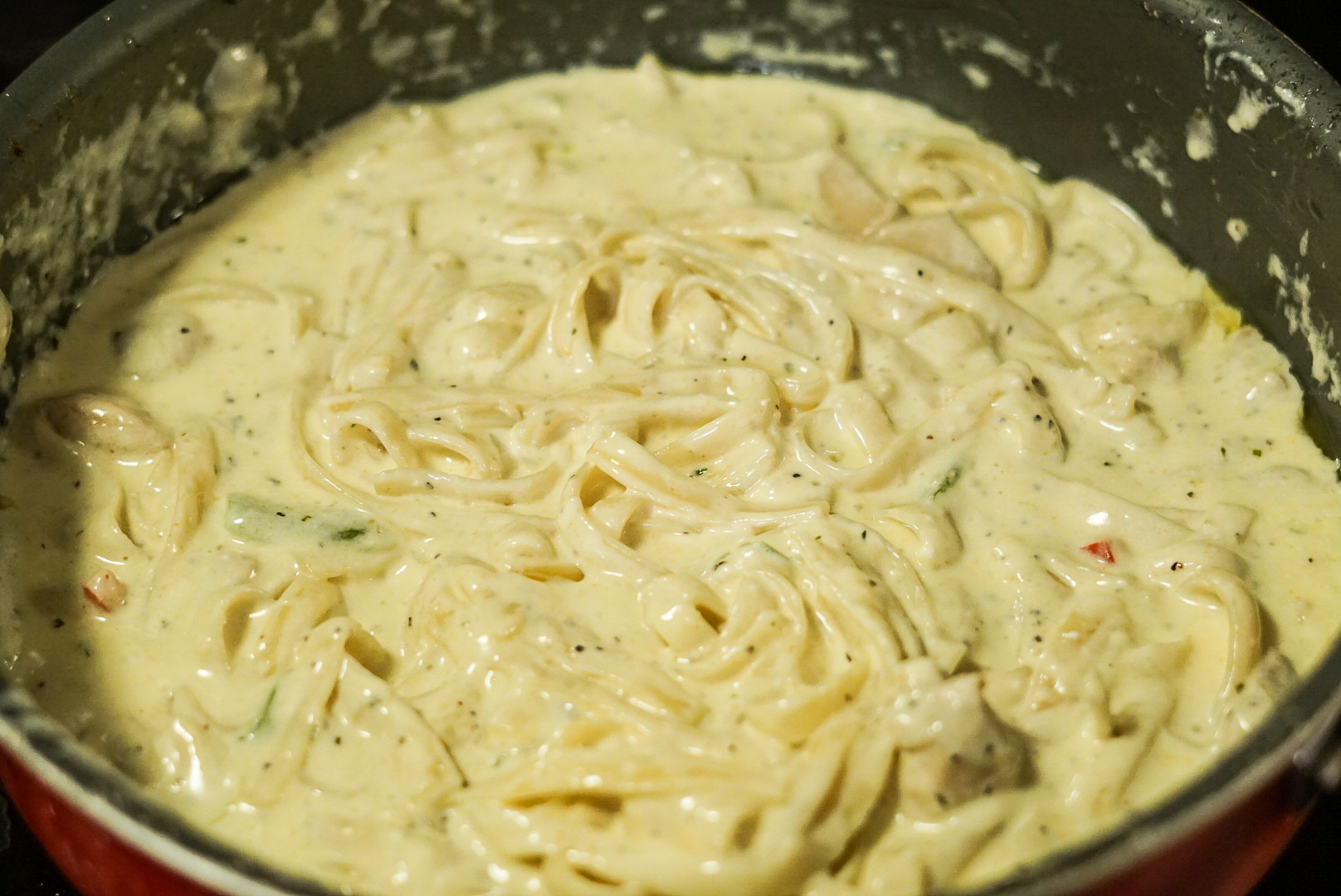 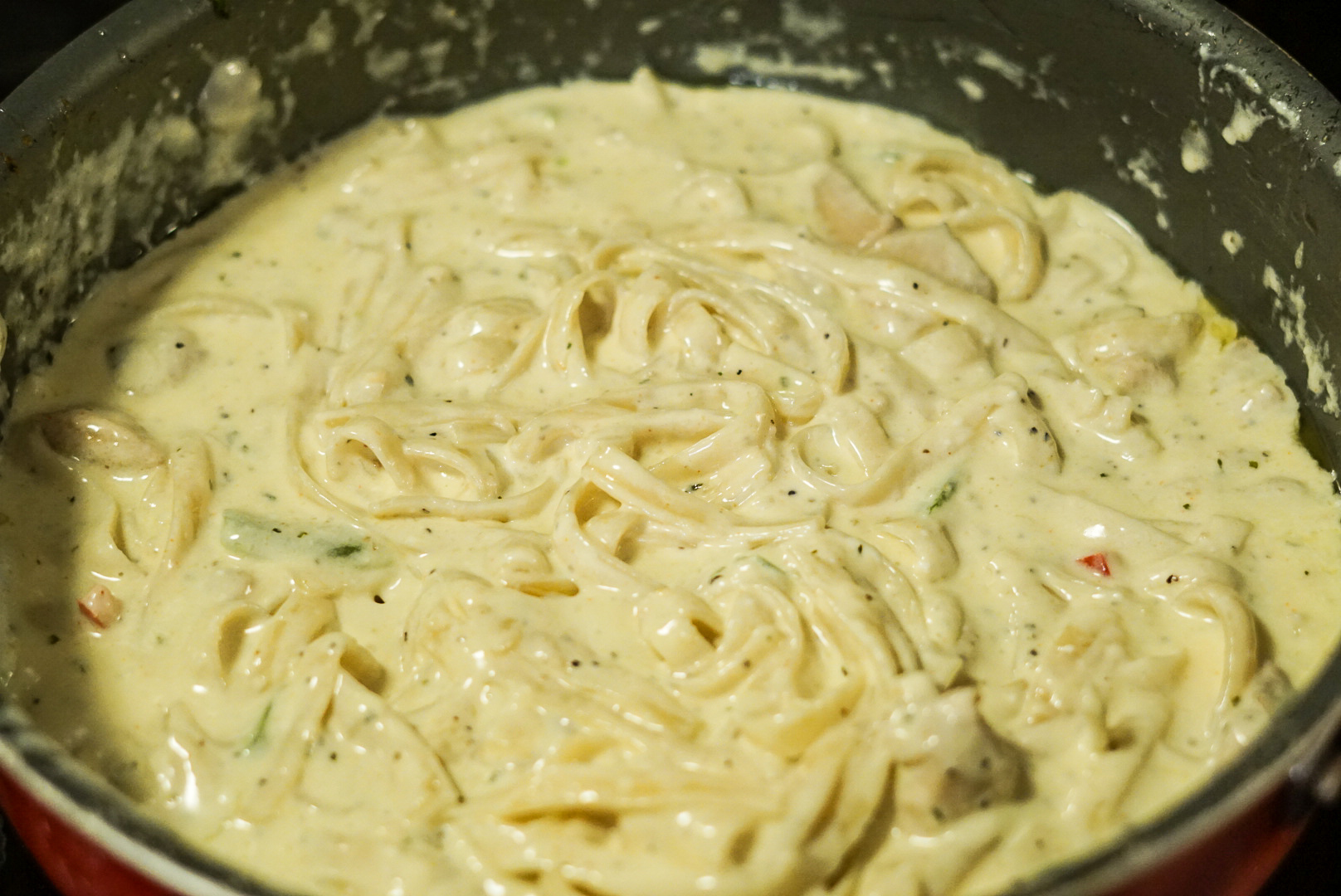 When I say dress the pasta, I truly just mean that I am adding salt and butter to the actual noodles before adding it into the sauce. You don’t need a lot of butter or salt, but just enough to give the noodles some flavor. Once you have completed that, then you will want to then add the noodles into the pan with the sauce and the meat. Go ahead and give it a nice mix and add some more seasoning if it needs it. After that, you can sprinkle more parmesan on top or just jump right in and eat, but either way that is it! 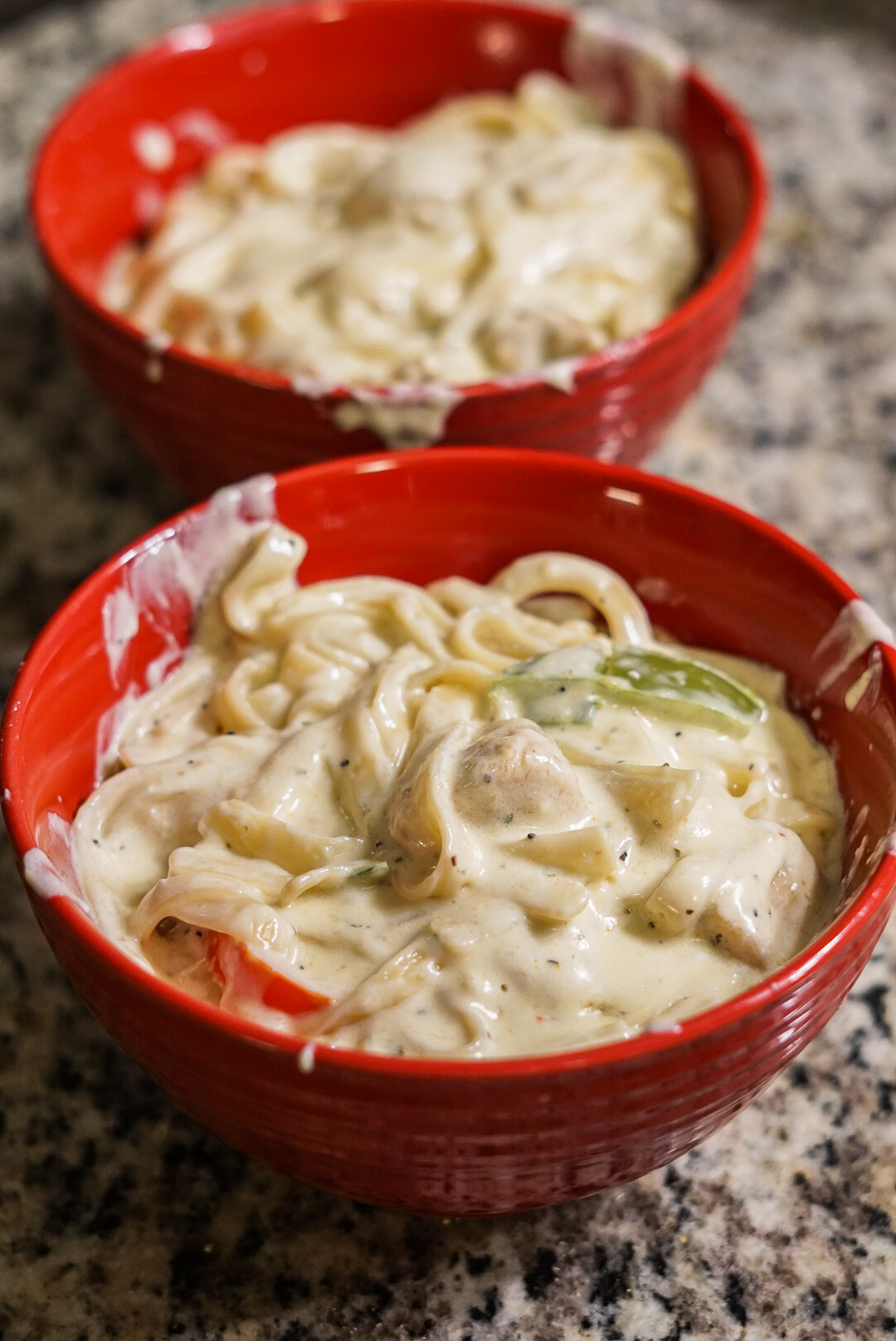 This meal has easily become one of my favorite meals and I am so happy that I finally perfected it and got to share it with y’all! It is so simple, it doesn’t take a long time, and it gives you a little taste of Italy in a pasta sense lol. I hope that you all enjoyed this pasta recipe!! I am trying to cook more, so I will definitely be back with plenty of recipes for y’all to try.

Thanks for the read and happy eats!!